The group of about 30 took part in a mock funeral for their school, which is closing at the end of the month because of severe financial problems.

Two "pallbearers" carrying a "coffin" — a violin case painted turquoise with the words "Burlington College 1972-2016" on it — led the procession on foot from the North Avenue school to the offices of Pomerleau Real Estate, where the chair of Burlington College's board, Yves Bradley, is employed.

Their not-so-subtle message? The school's leaders, and in particular its board of trustees, are responsible for its downfall.

Burlington College has a history of encouraging activism, and in recent years discord between the leadership and students and staff has intensified. A student protest in August 2014, led by some of the same people who attended Friday's mock funeral, prompted then-president Christine Plunkett to resign. Afterward, Bradley criticized the protest, suggesting that it nearly destroyed the school, which angered students even more.

This is, in fact, the second Burlington College-related mock funeral to take place in the city. Last December, after the college sold most of its campus to developer Eric Farrell, members of the group Save Open Space Burlington delivered a coffin to City Hall in protest.

During Friday's student-led ceremony, people placed the coffin on Pomerleau's grassy lawn and assembled in a circle. One student wore a suit despite the sunny, mid-70s weather. Others had put on black Burlington College T-shirts with the motto "Small is Big" written on the back.

Molly Skerry, who graduated in 2015, told the group to "please deposit your dead hopes and dreams in the coffin."

People fought back tears as they took turns eulogizing the college, some of them placing their prepared remarks into the coffin.

"I grieve for all the misfits who can't find their home at Burlington College anymore," said Marcia White.

Jon Chamis, who is just one semester short of the credits he needs to graduate, said the college was the first place where he felt welcomed. "Without this school, I wouldn't even have the courage to step into this circle," he added, before turning toward the white house on the hill and giving the finger. 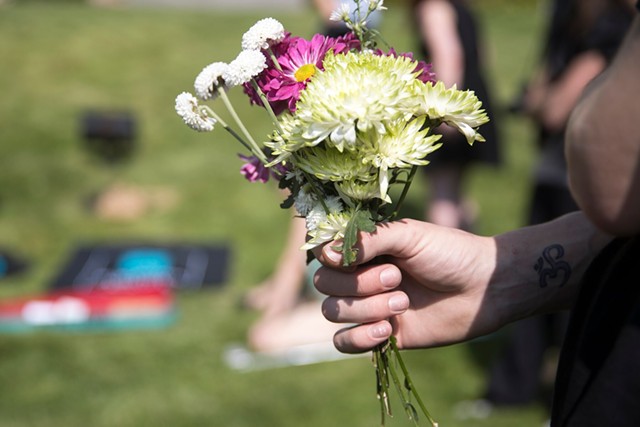 "This is simply a tragedy," said Sandy Baird, a legal studies professor who's taught at the college since 1986.

Emphasizing that Burlington College "is not a building," several made calls to resurrect the school. "Burlington College began in a living room, with a close group of people," said Dylan Kelley, who graduated in 2012. "If necessary, this group will begin again in the living rooms, coffee shops and libraries of this community."

At the end, Mikayla Johnson, who was chosen by her classmates to speak at her commencement last weekend, read the school's mission statement, and then dropped the sheet of paper in the casket.