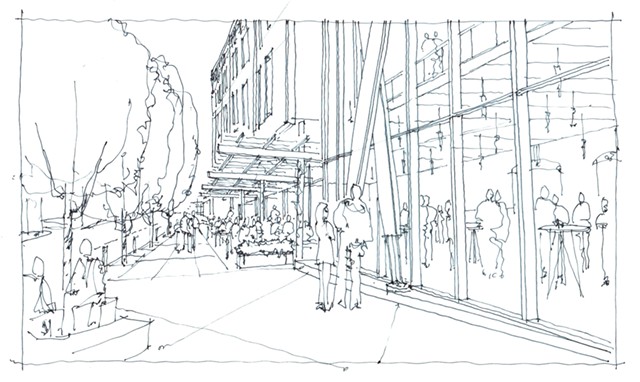 A new performance venue planned for Winooski could accommodate up to 1,500 people and would also have restaurants, shops and offices in a four- or five-story building called the Strand. It's been proposed for 66 Main Street in the heart of downtown.

The name is a nod to the former Strand Theater, which burned down at the site in the mid-1950s. The proposed development by Burlington-based Redstone would make over a key block on the northwest corner of West Allen and Main, now the site of a pocket park and shuttered drive-through bank.

The hall could host conventions, performances and community events, said Bill Niquette, senior associate at Redstone. It's not envisioned as a commercial movie theater. The bank will be demolished.

The goal is for the Winooski development to extend the downtown-style street life on the lower block of Main around Sneakers Bistro, the Mule Bar and other businesses to what is now a "dead block," Niquette said. The building would have three or four entrances, with the event hall at the northern end of the block. It would also have a roof deck facing west.

"The idea is to really bring the excitement of the downtown up that block," Niquette said.

He grew up in Winooski and remembers his grandmother and other old-timers talking about the Strand.

Two- and three-story wood frame buildings that housed a barbershop, a diner and a shoe store used to be on the block. Some burned down and some were demolished in the early 1970s under urban renewal plans.

The Winooski Development Review Board approved the project Thursday. The city council must also OK the proposal, because it involves easements on city property to expand the sidewalks on West Allen and narrow the street, as well as a portion of Main Street.

The city also must OK the project's complicated parking agreement, under which Redstone must find around 100 day-use spots off-site and be allowed to use the city parking garage for at least 68 spots in the evening. There would be no parking on the site.

Redstone is negotiating with the Veterans of Foreign Wars post on Main Street for parking. Niquette is also talking to other neighbors about parking, he said.

He hopes to bring the project to the city council within the next month and, if it's approved, would start construction in the fall. The company purchased the property from KeyBank earlier this year. The pocket park, which hosts the city's annual jack-o-lantern display, was owned by the bank and was part of the purchase, according to Niquette.

He oversaw the early phase of the city's downtown makeover as executive director of the Winooski Community Development Corporation from 1999 to 2005.

He declined to name any of the potential tenants, but said some are restaurants and businesses that are already in Winooski and want to grow.

And while parking is a challenge for the site, Niquette said he thinks he can find a solution. He has plenty of experience. "For better or worse almost all of my life as an urban developer is consumed solving parking problems," Niquette said. "It's not the sexy part of what I do."