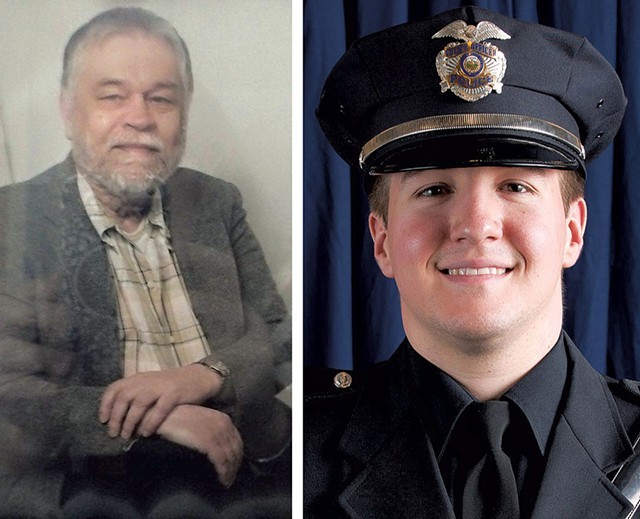 On Tuesday afternoon, prosecutors announced that Burlington police officer David Bowers would not face charges for fatally shooting knife-wielding Ralph “Phil” Grenon, a mentally ill man who engaged in a five-hour standoff with police before he was killed.

Hours after the announcement, Burlington police released to the media several hours of footage of the standoff, recorded by officers’ body cameras. The videos include the moments in which Grenon, 76, rushed officers with a knife and was gunned down.

Both Chittenden County State’s Attorney T.J. Donovan and Burlington Police Chief Brandon del Pozo said they believed the footage was part of the public record, but they urged the media to exercise restraint.

“The Burlington Police Department, the state’s attorney and the family of the deceased urge discretion and good sense in the propagation of these images,” del Pozo said in a prepared statement. “We believe that the need to hold the police accountable of the use of deadly force, which lies at the heart of a democracy, does not immediately translate into the need to widely and directly disseminate all of this footage. Please use good judgment.”

Local media outlets had varied responses, though most ended up using some of the footage in their reporting.

VTDigger.org posted video of the fatal shooting with its story. “We always wrestle with it,” VTDigger founder and editor Anne Galloway said. “We thought it was important for readers to see. We always err that way. We don’t believe news should be sanitized. It colors peoples’ reality when you sanitize the news.”

The Burlington Free Press posted links to all the videos on its website, along with an explanation from publisher Al Getler.

“It is the responsibility of the media to provide the public with information,” Getler wrote. “In this case, it is up to you to discern whether the video footage is something you wish to consume and/or whether doing so would further your understanding of the actions preceding the death of Ralph ‘Phil’ Grenon.”

Vermont Public Radio has not posted any video. The station briefly published a screen grab of Grenon clutching a knife on Wednesday but took the image down Wednesday afternoon “at the family’s request,” according to an update appended to its story. VPR news director John Dillon said Thursday that the station was still mulling whether to post the video.

WCAX-TV aired a few seconds of the footage, without audio, of police officers huddled inside Grenon’s College Street apartment. The video did not show Grenon or the fatal confrontation.

“Some of that stuff was pretty graphic so we decided not to just put up raw video,” WCAX-TV news director Anson Tebbetts said. Tebbets also noted that a camera crew from his station, on the night of the shooting, captured the sound of the police gunshots while filming a window of Grenon’s apartment. They aired that footage again in their coverage this week.

“We thought that was pretty powerful stuff,” Tebbetts said.

WPTZ-TV aired an edited version of the police videos, condensing five hours into two minutes, warning that the video “may be disturbing to some viewers.” The video shows Grenon being hit with a Taser, and then approaching officers. The video then cuts away when Grenon is fatally shot, though the shots can be heard. WPTZ-TV news director Michael LaFlesh did not respond to a message seeking comment.

Police released the videos at 6:13 p.m. Tuesday, during local television stations’ 6 p.m. newscasts. Local 22 & Local 44 is the only area station with a 7 p.m. newscast. News director Jolene Greene said she reviewed the videos immediately, and decided to only air a still photograph of Grenon wielding a knife.

“I thought that told the story. It showed what the police saw, it showed him with a deadly weapon, it showed a look of fear and shock and whatever he was feeling, and I thought that was enough for the viewers,” Greene said. “I don’t think there was an additional value [in the videos.] It’s a good thing that the police department released the videos, and it’s a good thing that we as journalists have the choice about what to put before our viewers.”

Seven Days has not published the footage.

“Nothing in the videos contradicted the previous detailed account that police and prosecutors offered, and for that reason they didn’t strike me as particularly compelling,” Seven Days news editor Matthew Roy said. “We do consider the question of how it is being handled [by news media] a very interesting one. It’s a quandary for everyone. The choices are not easy.”

Videos such as these pose dilemmas for media outlets with increasing frequency, according to Tom Rosenstiel, executive director of the nonprofit American Press Institute.

“Our responsibility is to inform the public,” said Rosenstiel, who co-authored The New Ethics of Journalism: Principles for the 21st Century. “That doesn’t always mean that you’re in the business of making everything public … Journalism is the act of making choices, of editing. Otherwise you’re not providing context, you’re not making sense of things or making meaning for people. You’re just a technological conduit.”

Rosenstiel said he is comfortable with outlets editing videos, as long as they explain their rationale and disclose their alterations. But he is not in favor of blanket policies in which outlets simply pass on records to the public.

“You want to make the public trust that you’re on their side, that you’re not protecting the cops or putting these videos out to sensationalize,” he said. “Part of our burden as journalists is to demonstrate to them that we’re making hard choices, and here are our reasons. You’ve got to exercise judgment and help clarify things for people. I’m not much a fan of mindless absolutism — ‘We post everything, here’s a link.’ What do I need you for at that point?”