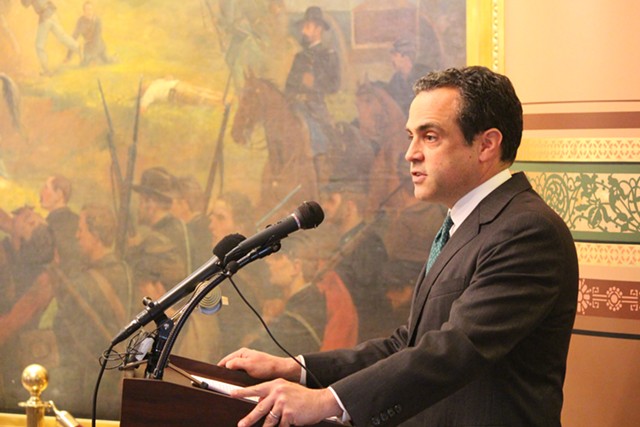 Speaking at a Statehouse press conference, Dunne outlined eight specific measures he would pursue if elected, including establishing an ethics commission, closing Montpelier’s revolving door and bolstering the state’s public election financing system. Some of the candidate’s recommendations were included in versions of an ethics reform bill passed by the Vermont Senate last month but discarded by the House.

“If we can’t rebuild [the public] trust, nothing else matters,” Dunne said. “We won’t be able to do what we need to do to meet our challenges in this state.”

Two months ago, the Hartland Democrat returned $16,000 worth of corporate campaign contributions and called on his opponents to do the same. Future Democratic rival Peter Galbraith — a longtime campaign finance reformer who had not yet entered the race — cheered Dunne on at the time and promised to refuse corporate donations.

“Whether you are a multimillionaire or a major corporation, you shouldn’t be able to buy the governor’s office,” Minter said in a written statement, adding that she was now “rejecting corporate contributions.”

According to her campaign manager, Molly Ritner, Minter made the decision to return the money on Thursday. She plans to issue $11,055 in refunds to corporate donors by the end of this week. As recently as March, Minter refused to do so, calling Dunne’s challenge “a campaign stunt.”

Dunne made two new demands of his fellow candidates Thursday morning: to promptly release personal financial information and to refrain from self-funding their campaigns.

All three of the Democrats in the race, as well as Republicans Bruce Lisman and Phil Scott, have disclosed certain financial information, but neither Galbraith nor Lisman has released his 2015 tax return. Galbraith provided a preliminary summary of assets last month and pledged to turn over more details at a later date. Asked Thursday when that might be, he said, “It depends on when my accountant gets around to doing it.”

In her statement Thursday, Minter joined Dunne in calling for the others to refrain from financing their own campaigns. She said they ought to “agree to an equal playing field by not investing personal funds into this race.”

It appears that only two candidates have done so. As of March 15, Lisman had contributed $453,844 of his own money to his campaign. Galbraith, who entered the race after the March disclosure deadline, said Thursday that he had loaned his campaign $15,000 but hoped to pay himself back.

“It is not my intention to self-fund. It is my intention to raise money,” said Galbraith, who self-funded his 2010 race for the state senate. “I’m not excluding the possibility of making further loans to myself.”

Lisman’s campaign manager, Shawn Shouldice, said it was “bad policy” to prevent candidates from spending their own resources. Doing so, she said, would make them “more reliant on special interest donations” and advantage incumbents.

“Having money in politics is not necessarily a bad thing,” Shouldice said. “It depends on how and what the money is spent.”

Lisman, a retired Wall Street banker who lives in Shelburne, called for many of the same ethics reform proposals when he led the advocacy group Campaign for Vermont, Shouldice noted. She said he “strongly agrees” that Vermont needs higher standards.

Following Dunne’s press conference, Galbraith issued his own challenge: for each of his Democratic opponents to limit their primary election campaign spending to $500,000 — or whatever amount of money they had raised by Thursday. As of the March filing deadline, Dunne had collected $567,469 while Minter had taken in $487,557.

“The real issue here is the obscene amounts of money going into a primary in a small state,” Galbraith said, adding that $500,000 is “a fair amount.”

Both Dunne and Minter declined the challenge.

Scott, the lieutenant governor, did not specifically respond to Dunne’s proposals Thursday. But his campaign manager, Brittney Wilson, said that the Berlin Republican was “the one candidate who can restore faith and trust in state government.”

“Democrats have controlled the governor’s office and both [legislative] chambers for six years,” she said in a written statement. “They had a chance to make meaningful fiscal and economic reforms and have failed.”

“Vermonters have been watching and seeing a trend,” Dunne said.

Wilson took umbrage with Scott’s inclusion in the list of alleged transgressions, calling it “a political stunt” and “quite frankly, a cheap shot at Phil.”

“Matt is lumping the construction company that Phil co-owns, which, by the way, participates in an open and transparent state contracting process, in with a criminal investigation with a sitting senator and possibly one of the largest scandals in Vermont,” she said.

Referring to several national studies, Dunne — a former state senator and Google manager — said that the state’s ethics laws trail most others’. His recommendations include:

“When it comes to promoting and protecting the integrity of our government, our laws and institutions just don’t measure up,” Dunne said.

While he was more than willing to make demands of his fellow gubernatorial campaigns, Dunne shied away from criticizing Democrats who are not in the race. Asked if he had any concerns about alleged ethical lapses in Gov. Peter Shumlin’s administration, the candidate declined to comment, saying he was “looking forward” — not backward.

Dunne also declined to say whether he thought Sen. Patrick Leahy (D-Vt.) or Congressman Peter Welch (D-Vt.) — two Democrats who have raised millions of dollars over the years from corporate and union political action committees — should return such contributions.

“I’m not going to be commenting on the federal races or the other campaigns,” he said.

Updated May 13, 2016, at 6:18 p.m. to clarify Galbraith’s position on corporate donations, the nature of Leahy’s and Welch’s donations and to add comment from the Lisman and Scott campaigns.