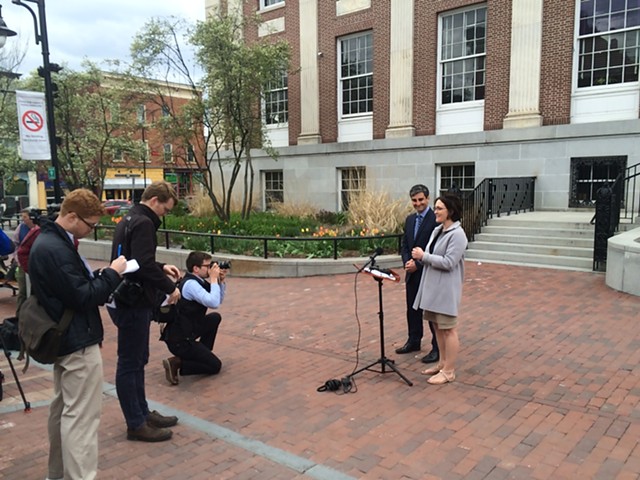 Burlington Mayor Miro Weinberger announced Monday that he wants state Commissioner of Housing and Community Development Noelle MacKay to be his new Community and Economic Development Office director. She would earn $96,836.

Weinberger is seeking a "personal hardship" exemption from the city council on MacKay's behalf so she does not have to move from Shelburne to Burlington. Otherwise, MacKay would need to comply within a year with a charter provision that stipulates top appointees must be legal voters in Burlington — for which residency is a requirement.

The mayor also wants to expand such exemptions going forward.

Debate flared about the residency rule last month. Some residents questioned the hardship exemption given to Burlington's new school superintendent, Yaw Obeng, who earns $153,000 and bought a house in South Burlington.

Supporters of the charter provision, including city council president Jane Knodell, say it means that leaders have to live with their decisions and have "skin in the game." Opponents say it's not fair to ask people to move for appointments that might last just a few years, that doing so can limit the pool of qualified applicants and that it doesn't matter where they live anyway.

Seven Days recently found that a number of high-paid city appointees have exemptions. They included former CEDO director Peter Owens, who commuted from a home in Hanover, N.H., and who recently resigned.

In a memo to the council, Weinberger wrote that it would be a personal hardship for MacKay to move to Burlington because she and her husband purchased their Shelburne home in 2012 and "have put significant resources into restoring it." Weinberger added: "If they are required to sell their home in the next year, they are likely to suffer a financial loss."

The mayor also wants the council to approve an amendment to broaden exemptions. The proposal would grant exemptions to appointees who "own and reside in a home in Chittenden County at the time of their appointment and who certify that having to move from that home to become a legal voter of  Burlington would cause the appointee's family significant hardship. "

MacKay's appointment confirmation and exemption request will come before the council May 16.  She would start work August 1.

In her state position, MacKay oversees a staff of 40 permanent employees and 50 seasonal employees and a department with a $28 million budget. She is the former executive director of Smart Growth Vermont.