Updated 4:56 p.m. on May 6 to include quote from Sen. Norm McAllister.

McAllister, who was suspended from the Senate in January, will go to trial June 15 on sexual assault charges involving a woman who worked last year as his legislative assistant, Vermont Superior Court Judge Robert Mello determined at a status conference. McAllister did not attend the hearing. 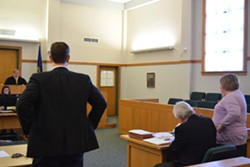 No date was set for the sexual assault charges involving a second woman who worked for McAllister on his Highgate farm. That case will also involve misdemeanor charges stemming from accusations by a third woman, who has since died, that McAllister propositioned her for sex in exchange for allowing her son to continue living in a trailer McAllister owns.

Splitting the cases into two is a win for McAllister because it means the jury in June won’t hear about the other charges. Diane Wheeler, Franklin County deputy state’s attorney, didn’t argue against separating the cases. She said after the hearing that severing the charges was warranted based on the law.

McAllister’s trial had been scheduled to start next week, but McArthur and Wheeler told Mello they have yet to complete questioning witnesses. McArthur said lawyers on both sides of the case have started deposing the former legislative assistant, but are seeking to schedule more questioning.

The other alleged victim, who had continued living in a trailer on McAllister’s farm even after the charges were filed, has since moved out of state and has not yet been deposed, McArthur said. “I haven’t been able to locate her,” he said. He said she moved out of McAllister’s trailer “a month and a half or so ago.”

Wheeler said she has had no trouble connecting with the woman through her lawyer. “He’s been consistently in contact,” she said.

Wheeler had issued subpoenas last year to Seven Days journalists Mark Davis and Paul Heintz to question them about interviews they conducted with McAllister and his former legislative assistant. The newspaper was able to have Heintz’s subpoena quashed, but lost a motion to quash Davis’ subpoena.

With the trial delayed until June, the criminal charges against McAllister won’t be resolved before the May 26 deadline for political candidates to file to run in the November election. McAllister said by phone Friday afternoon that the timing complicates his decision whether to seek reelection. He had hoped for resolution of at least one of the cases before the filing deadline.

“I probably will file anyway,” he said. “I can always change my mind and decide not to run later.”