Budget and Tax Bills Pass Despite Republican Opposition | Off Message 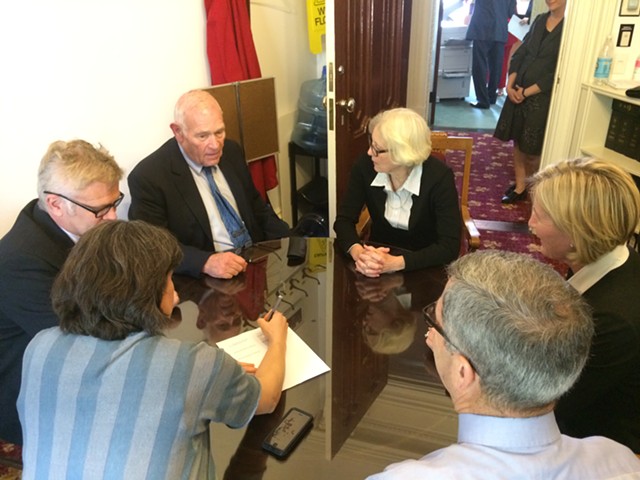 Without more members, Republicans in the House and Senate could do nothing Friday to stop adoption of a $5.76 billion budget that many argued spends too much. Nor could they prevent enactment of $27.4 million in new fees and $8.8 million in new taxes.

But to create voting records they can take on the campaign trail, House Republicans demanded roll call votes on each of the money bills. Some Republicans shouted their “no” votes on tax bill, which prompted Democrats and Progressives to raise the volume on their “yes” votes.

Senators passed all three bills with voice votes. On the budget vote in the Senate, someone offered a barely audible “no.”

“We are not on sound economic footing,” said Sen. Dustin Degree (R-Franklin), who voted against all the money bills earlier in the process.

“Spending is continuing to grow more than revenues,” said House Minority Leader Don Turner (R-Milton). “We have to stop,” he told the House late Friday, shortly before the vote. He had talked throughout the session about the need to curtail spending instead of increasing any fees or taxes.

Earlier, Rep. Carolyn Branagan (R-Georgia) drew a muted groan from her House colleagues when she declared, “Fees and taxes aren’t the same thing.” She reminded them that users of government services pay fees. The legislature reviews groups of fees each year to keep charges current with costs.

House and Senate negotiators reached agreement on the budget bill in the middle of the night Thursday — which theoretically allowed lawmakers time to acquaint themselves with its provisions before voting. A deal on the budget always signals a countdown to adjournment.

“There are not a lot of shiny new toys in this budget,” said Johnson, as she grabbed dinner in her empty committee room before the final push Friday night. She said its drafters tried to stabilize state government after the “really drastic changes” last year that included $53 million in cuts and elimination of nearly 200 positions.

Kitchel noted that the budget includes $1.2 million for “anticipated expenses that we think are likely to materialize,” such as increased needs for heating fuel assistance. The bill also proposes a speedier schedule for paying down the unfunded liability for the state retirement systems.

The budget adds social workers, substance abuse screeners, attorneys and a judge to help the Department for Children and Families cope with the increased child protection cases.

Tricia Coates, director of external and governmental affairs for the Vermont State Colleges, welcomed the $700,000 in extra funding in the budget for student assistance.

Wendy Koenig, director of federal and state relations for the University of Vermont, noted the budget lifted the rule that had required that Vermont students never pay more than 40 percent of what out-of-state students pay. The change will allow UVM to reduce out-of-state tuition, which Koenig said is much higher than many other schools in New England, without lowering in-state rates.

Karen Lafayette, who advocates for low-income Vermonters, appreciated the $11.6 million for weatherization aid. “It’s a good result,” she said, because it reduces the energy burden for low-income residents and generates a lot of economic activity.

Despite the complexity and millions of dollars involved in the budget, the final push to wrap up work had taken its toll and lawmakers had little energy for the final deliberations.

After Kitchel reported on the budget compromise, Sen. Tim Ashe (D/P-Chittenden) was the sole senator to rise.

“In eight years in the Senate I have never not asked a question on the budget,” Ashe said.

Before he could, Kitchel quipped, “You could start now.” Ashe sat down.