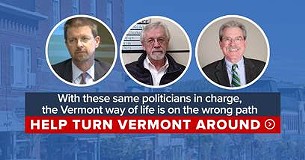 In its initial advertisements, the Republican State Leadership Committee focused its attention on House Speaker Shap Smith (D-Morristown), Sen. Mark MacDonald (D-Orange) and Rep. Stephen Carr (D-Brandon). But according to RSLC spokeswoman Ellie Wallace, “every incumbent Democrat who votes to make Vermont less affordable should be on notice” that they could be targeted next.

In a digital advertisement and new website, the RSLC used a mugshot of Carr snapped by the Berlin Police Department in January, when the second-term lawmaker was charged with driving under the influence. Carr settled the case last week by pleading guilty to a reduced charged of negligent driving.

According to Smith, use of the photograph was utterly inappropriate.

“I think it’s about the lowest thing I’ve seen in my time in politics,” he said. “The fact that they would use somebody’s mugshot is, I think, beneath the Vermont level of politics.”

Smith said Vermont’s Republican leaders should demand that the national organization take it down. But his GOP counterpart, House Minority Leader Don Turner (R-Milton), said he would do no such thing.

“I respect his opinion and I dislike [the use of] that picture, but I need groups like RSLC to help in Vermont if we’re ever going to pick up more seats,” Turner said.

The minority leader said he is a member of the organization and plans to attend a conference it’s hosting in Florida next week, but he said he was given no advance notice of the Vermont campaign. He did say he was “very impressed” with the work the group did supporting Republican candidates before the 2014 election. That cycle, the RSLC spent $370,000 on ads targeting four Vermont Senate candidates and 25 House candidates.

MacDonald was among them. He managed to win reelection and, thus far, has not drawn an opponent.

MacDonald also criticized the group for being funded by “the big chemical companies and petroleum companies” and by the conservative donors Charles and David Koch. According to the Center for Responsive Politics, the RSLC’s biggest contributors include the U.S. Chamber of Commerce, Reynolds American, ExxonMobil and Koch Industries.

Smith said he found the choice of targets baffling, given that he does not plan to seek reelection to the House.

“I’m surprised that the RSLC would target somebody who’s not a candidate,” said Smith, who is considering a run for lieutenant governor. “It seems like a poor expenditure of money.”

Like MacDonald, Carr has also not yet drawn an opponent. He said he is prepared to “run on my record” and defend it against attacks.

Carr said that while he “regret[s]” the incident that led to his arrest, he was disappointed to see the RSLC use his mugshot in an attack ad.

According to Carr, not one constituent has criticized him over his arrest.

“The predominant point made is, ‘There but for the grace of God go I,’” he said. “A lot of folks are saying that type of thing.”