The House shot down a Senate bill Tuesday that would have legalized the sale and possession of marijuana starting in 2018.

Still up for consideration in the House on Tuesday afternoon is a separate measure to decriminalize home cultivation of up to two marijuana plants. It’s unclear whether that will pass.

But first came a vote on the Senate’s version. By a 121-28 vote, the House nixed all provisions related to legalizing, taxing and regulating marijuana from the bill.

Though that effort passed the Senate 17-12 and had the support of Gov. Peter Shumlin, House leaders had long signaled that legalization lacked support among their members. Tuesday’s vote affirmed that.

Rep. Chris Pearson (P-Burlington) tried to persuade members otherwise, questioning why it’s OK for Vermonters to sip chardonnay in the evening but not use cannabis. It’s time to 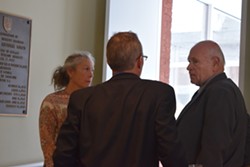 change the conversation about marijuana, he said.

“We are just in a wildly unhealthy area of dialogue about what it means and what it doesn’t mean,” Pearson said.

Rep. John Bartholomew (D-Hartland) agreed. “Prohibition has not worked and never will. It’s time to try something else,” he said.

House Judiciary Committee chair Maxine Grad (D-Moretown), whose committee has struggled to embrace legalization, argued that the Senate bill would open the door to a large-scale commercial marijuana market. “S. 241 is not the Vermont way,” she said.