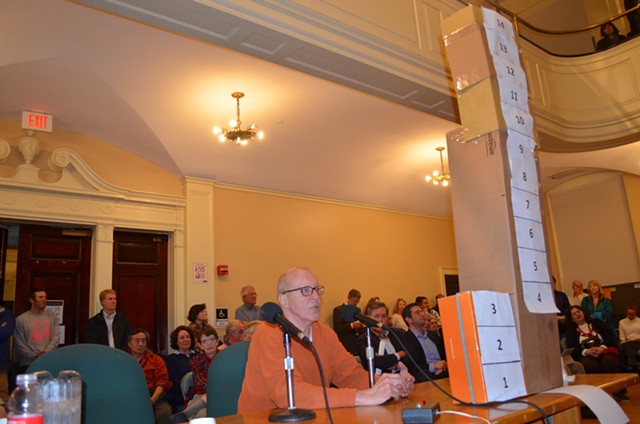 In a 10-1 vote, councilors signed off on a predevelopment agreement outlining commitments from the city and the developer of the Burlington Town Center project. This marks an important milestone for Sinex, who’s spent the last 18 months working with the city to refine his plan to turn the Burlington Town Center into a massive mixed-use development with apartments, retail and office space.

Next, the developer hopes to get city approval for a zoning change that would allow him to build 14 stories high.

Councilors expressed lingering concerns about certain elements, including the project’s scale. But, said Democrat Joan Shannon, who represents Wards 5 and 6, “We have this fortress that consumes the center of our downtown, and it’s worth something to me to open that up.”

Last-minute concessions during the past several days won over councilors who expressed skepticism last week. Sinex reduced the number of student housing units that he plans to lease to Champlain College from 110 to 80. He agreed to a requirement that a market study of the project take place by August. Sinex also promised to pay for a three-dimensional model of his project, something a number of residents and several councilors have asked for.

In the meantime, three residents showed up Monday night having jerry-rigged their own cardboard models to make a point: The project is gigantic.

For the second week in a row, people crammed into Contois Auditorium to weigh in on whether that was desirable or not. Scott Baldwin urged the council not to hesitate on a “once-in-a-lifetime opportunity to revitalize our downtown.”

Monique Fordham rejected that premise: “When there is money to be made, believe me, it’s never a once-in-a-lifetime opportunity — that’s bullshit,” she told the council.

Fordham and others urged the council to take more time to review the agreement, a recommendation that won favor with Progressive Max Tracy of Ward 2, who was the only councilor to vote no. Pointing out that the council had just 12 days to review the agreement, he made an unsuccessful attempt to delay the vote by two weeks. “We need to make sure this is not just a playground for the rich,” Tracy said.

Mayor Miro Weinberger, who along with Sinex was pushing for swift approval from the council, strenuously disagreed, arguing that there has been “an extreme amount of process and deliberation.”

Some of the more hesitant councilors made a point of mentioning that the public will get more say on the project — most notably when they vote on whether to approve $21.8 million in tax-increment financing to pay for public infrastructure improvements associated with the plan.