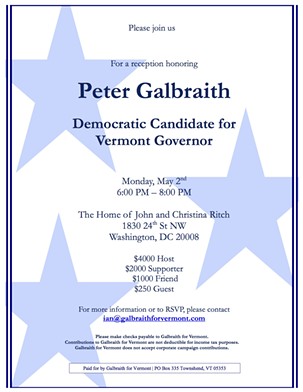 Galbraith traveled to the nation’s capital for a fundraiser at the Kalorama Heights home of former World Nuclear Association director general John Ritch and his wife, Christina. According to an invitation the campaign provided Seven Days, suggested donation levels ranged from $250 to $4,000.

Galbraith campaign manager Ian Moskowitz said the candidate and Ritch worked together on the staff of the U.S. Senate Foreign Relations Committee earlier in their careers. When Galbraith served as ambassador to Croatia, Ritch was ambassador to the International Atomic Energy Agency.

During his time in the Vermont Senate, Galbraith railed against the state’s campaign finance laws and sought to decrease the amount of money candidates could raise. Asked why his boss would travel out of state to collect big checks, Moskowitz said, “Peter is in D.C. raising money from friends and former colleagues who know he would make a great governor.” He did not immediately say whether the candidate would accept money from registered federal lobbyists.

Galbraith is hardly the first gubernatorial candidate to hit up donors in D.C. Republican Lt. Gov. Phil Scott held a fundraiser there in March. Democratic former state senator Matt Dunne did the same last December and again in February. Democrat Sue Minter missed a debate at Vermont Law School in April to attend an EMILY’s List fundraiser in D.C., though her campaign said she was not there to raise money for her own bid.