“It’s business as usual. It’s actually better than business as usual,” he said Wednesday morning at the Hotel Jay & Conference Center. “We expect that the hotel will thrive. The only thing we’re praying for is snow [next] winter.”

Goldberg, who was appointed by a federal court two weeks ago to oversee the assets of two Northeast Kingdom developers accused of fraud, made the remarks at a press conference organized by Gov. Peter Shumlin. Earlier Wednesday, Goldberg, Shumlin and Secretary of Commerce Pat Moulton met with Jay employees to reassure them that their jobs remained secure.

“With all the press on this in the last 10 or 12 days, it’s obvious that the public kind of wonders: Is there a business here?” Shumlin told reporters. “Not only is this place alive and well but looking for staff. If you want a job, come and apply.”

Goldberg himself sowed seeds of doubts about the resort’s financial future when he wrote in court papers last Friday that the business was “currently losing money and in danger of not having sufficient funds to continue operating beyond the very immediate future.” He explained Wednesday that he had simply been attempting to keep one of the accused developers, Jay Peak owner Ariel Quiros, from getting his hands on assets frozen by the court.

“We were basically saying to the judge: ‘We need all the money we have available to operate the hotel and keep it open,’” the receiver said. “And then, if you give it to [Quiros], there may be a cash crunch here.”

Since then, Goldberg said, he had obtained additional funds to keep the resort open through the slow summer season — including $1.3 million in assets newly discovered in a Canadian bank.

Asked if he could “100 percent” guarantee that Jay would remain in business, Goldberg said, “I can never guarantee anything 100 percent. But I can guarantee it 99.999 percent. I don’t know what happens in the world, but it won’t be anything operational that would shut the Jay Peak down.” 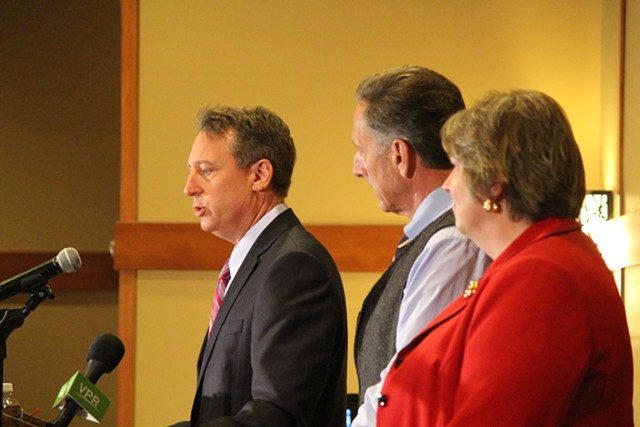 Goldberg, a Miami attorney, said he had overseen 25 receiverships in his career, but that this one was unlike any other.

“A lot of times, I’ll come in and there’ll be nothing, and we have to start scrambling to find out where the money went,” he said. “Well, it’s pretty obvious where much of the money went here, because you have the buildings. You have an operating hotel that is operating profitably.”

In a typical fraud case, he continued, investors demand their money back “immediately.” But the hundreds of foreign investors who plowed at least $500,000 into Jay Peak and related Northeast Kingdom development projects were principally seeking permanent residency through the federal EB-5 investor visa program. To complete that process and land a visa, each participant has to demonstrate that his or her investment created at least 10 jobs.

“Over the last week, I’ve been contacted by several investor groups for different projects ... who want to actually infuse additional funds into the projects to finish and complete them — so the jobs can be created, so they can get their EB-5 visas,” Goldberg said. “They’re more concerned, in many respects, with getting their EB-5 status than getting their money back.”

Shumlin jumped in: “That’s not universal, but it’s a large portion of EB-5 investors. Or a percentage of them are saying, ‘Can we help? Because what we really want is the jobs to remain.’”

One investor, Felipe Vieira, showed up to the press conference to ask Goldberg and Shumlin what they had heard from the U.S. Citizenship and Immigration Services about how the agency might handle visa applications such as his.

A native of Brazil, Vieira sold his farm and an apartment to finance his EB-5 investment and now lives in Stowe with his wife and 16-year-old daughter. Because he invested in a Jay Peak project that has yet to be completed, he said he is worried about being able to prove to USCIS that his $500,000 investment actually created 10 jobs.

“You know, everybody is scared to death,” he told reporters after the press conference.

Though Vieira hopes the project will be completed, he does not count himself among those offering to put up more cash.

“To tell the truth, I don’t have money,” he said. “I basically depleted the money I had.”

“I’d like to hear this gentleman’s question,” a reporter said.

A few minutes later, Vermont Public Radio’s Taylor Dobbs asked Vieira’s question on his behalf: “Felipe’s question is: ‘What are you hearing from USCIS?’”

Moulton said that while the agency was continuing to accept applications, “Their approval process is ridiculously slow.”

Asked about those who, like Vieira, have put up money for partially completed projects, Goldberg said he did not know their fate.

“I’m going to be meeting with the investors. My representation of the investors is my primary concern,” he said. “I will do anything I can to better them. I will fly to Washington, if I have to.”

“Will you hear their questions?” Dobbs shot back.

“Of course,” Goldberg responded. “I’ve spoken with Felipe, and we’ve communicated. Just so you know, I’ve spoken with hundreds of investors already. Everybody has my cell phone. I mean, half of the people in this place have called me.”

Said Shumlin, “Michael’s happy to talk to investors. He’s just not going to do it in a press conference. OK? Other questions? Thank you very much. Appreciate you being here.”