Democratic gubernatorial candidate Peter Galbraith launched a stinging attack against the leader of his own party Monday, questioning the role Gov. Peter Shumlin played in an economic development initiative that federal prosecutors say was riddled with fraud.

During a noon press conference in front of the Statehouse, the former state senator and ambassador called for the creation of an independent commission to investigate the state's oversight and promotion of the Northeast Kingdom projects. He questioned the veracity of Shumlin's public statements on the matter and said Vermonters wanted to know the extent of his involvement.

“In short, what did the governor know? When did he know it? And what did he do about it?” Galbraith said, paraphrasing the late U.S. senator Howard Baker at the height of the Watergate hearings.

Though all five candidates vying to succeed Shumlin have raised questions about the scandal, Galbraith went further than his peers in tying the incumbent to it. He lampooned Shumlin for arguing last Thursday that he had not been influenced by the thousands of dollars worth of campaign contributions he'd received over the years from Quiros and Stenger.

"For many Vermonters, this does not pass the laugh test," Galbraith said. "There is good reason to suspect that the Quiros-Stenger projects received special treatment that has not been given to other projects."

The Townshend Democrat pointed to Shumlin's trips to China, Vietnam and Miami to promote the state's EB-5 regional center, through which the developers sought international financing. Stenger accompanied the governor and paid for his travel, though Shumlin has claimed he never specifically talked up the Northeast Kingdom projects.

"I know of no other case where a private business funded the governor's foreign travel and where the governor then pitched investors so as to benefit the business," Galbraith said. "But even if the governor is correct, Vermonters have clearly lost confidence in our state government."

Among the thorniest questions Galbraith said he hoped the commission would answer was “whether the governor’s presentations while traveling on Stenger’s dime led unsuspecting foreign investors to believe the projects were sanctioned by the state of Vermont or by the United States government and therefore were safer investments than they actually were.”

A longtime proponent of campaign finance reform, Galbraith said the episode reinforced his desire to ban corporate contributions, because both Quiros and Stenger had donated to Vermont politicians through the companies they controlled.

Sen. Patrick Leahy (D-Vt.) and Congressman Peter Welch (D-Vt.) — both of whom promoted Vermont’s EB-5 projects abroad and accepted campaign contributions from Quiros and Stenger — pledged last Friday to donate the money to charity. Shumlin resisted at first, but spokesman Scott Coriell said Monday morning that the governor had changed his mind over the weekend and now planned to donate $15,000 to a Northeast Kingdom charity focused on substance abuse treatment.

“Given the seriousness of these allegations and their potential impact on the economy in the Northeast Kingdom, it is completely inappropriate for any candidate to play politics with this issue,” Shumlin’s spokesman said in a written statement. “While we all feel deceived by the alleged fraud, it’s important to remember that this administration is the one that changed the oversight system and helped uncover it.” 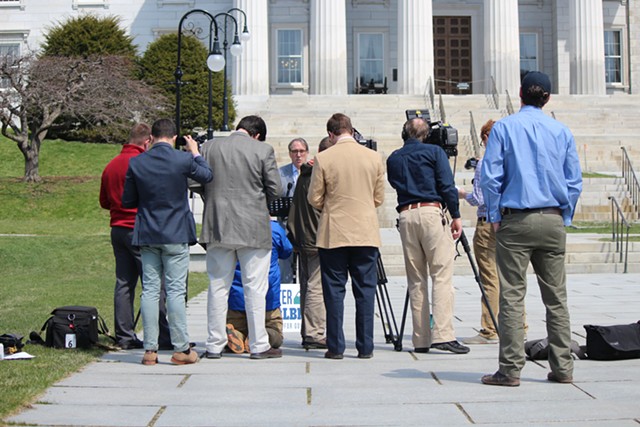 Galbraith did not describe in detail how he believed his proposed commission should operate, but he said it was important that the chief justice of the Vermont Supreme Court — not the legislature or the governor — appoint its members.

"Those who receive corporate and special interest money are ill-equipped to judge its consequences," he said.

House Speaker Shap Smith (D-Morristown) said later in the day that he shared Galbraith's desire "to get to the bottom of what happened" and called the creation of an independent commission a "possible option." But he said he would not want to do anything that might interfere with ongoing investigations by the SEC, the AG or U.S. Attorney Eric Miller, who is investigating potential criminal charges.

"So it's too early for me to say this is the way to go," Smith said.

“I think the proper forum right now would be the Attorney General’s Office, because they have the investigative tools available at this time,” he said. “To me, it would be a better resource than just asking the chief justice of the Supreme Court to appoint a panel.”

Galbraith was hardly the only gubernatorial candidate to weigh in on the matter.

Lt. Gov. Phil Scott, a Republican, was the first out of the gate last week. In a statement issued by his state office, the candidate said there appeared to be “a significant lack of oversight on this project.”

Among the questions Scott asked: “What steps, if any, did the administration take to prevent this from happening?”

Republican rival Bruce Lisman hammered Shumlin over the weekend for his initial decision to keep the money contributed by Quiros and Stenger. He called the governor’s refusal to do so “totally unacceptable.”

Lisman also jumped on a VTDigger.org story, which has been contested by the Shumlin administration, alleging that the administration sought to destroy emails related to the scandal. Lisman said such conduct would raise “very serious and disturbing concerns.”

“We must not make presumptions until we have all the facts, but what we need now is for the Shumlin and Douglas administrations to place transparency above all other concerns and voluntarily release all of the emails relating to the EB-5 development in question,” the former state senator said.

A third candidate for the Democratic nomination, former transportation secretary Sue Minter, agreed that the emails should be released, calling it “the first step to restoring public trust in government.”

“The next governor will need to take swift action on comprehensive ethics reform and work with the Northeast Kingdom to restore hope and develop a vision for future economic development,” Minter said.