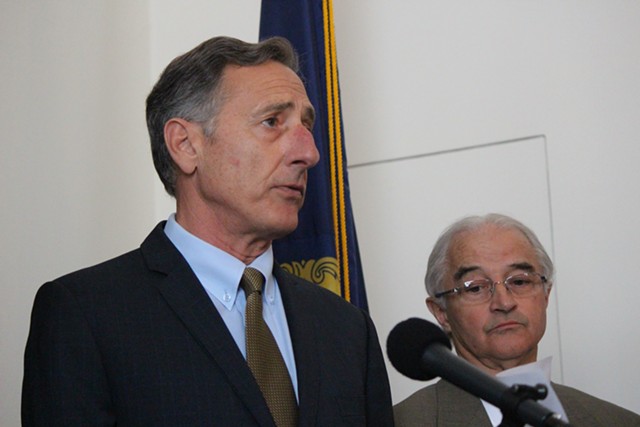 Gov. Peter Shumlin's administration pushed back this weekend against an explosive report suggesting it requested to delete a slew of old emails upon learning of a looming bust by the Securities and Exchange Commission.

VTDigger.org's Anne Galloway reported late Friday that Shumlin's legal counsel, Sarah London, asked an information technology employee on April 8 to purge the state's servers of emails belonging to five former staffers. One of the ex-employees was former deputy chief of staff Alex MacLean, who left the governor's office in January 2013 to work as a contract project manager for Jay Peak Resort.

According to Galloway, the administration had learned a day earlier, on April 7, that the SEC was about to charge Jay Peak owners Ariel Quiros and Bill Stenger with fraud. A week later, the feds seized the resort, froze the men's assets and accused them of misappropriating $200 million worth of foreign investment.

Scott Coriell, the governor's spokesman, took exception to the inference of the VTDigger story.

"These two issues are not related," he told Seven Days. "Any effort to conflate them is completely inaccurate."


The accounts were not deleted, due to intervention by the Secretary of State's office. Even if they were, Coriell said, any documents related to the Northeast Kingdom scandal "would not have been deleted under any circumstances." That's because Attorney General Bill Sorrell placed a litigation hold on such documents months ago.

Shumlin was not aware of London's request, Coriell said.

The spokesman also disputed the notion that his office had only just learned of the pending SEC civil charges when London made her request. The administration, he argued, "had been preparing for months for an expected filing by the state and the SEC."

Meanwhile, Coriell said, the governor's staff had been working with the Secretary of State's office for nearly 10 months to manage the archiving and disposal of administration files at the end of Shumlin's term next January. He said London was simply complying with the state archivist's document retention schedule, which he said allowed for the deletion of emails with "no archival value in staff accounts that are more than three years old."

An email provided by the Shumlin administration shows that London made a request to delete the accounts earlier than reported in the VTDigger story. In the April 1 email, London told Department of Information and Innovation Commissioner Richard Boes that she would "like to remove the accounts of folks that are more than three years old (keeping in mind we have all [Shumlin] correspondence from all accounts)." The VTDigger story quoted a later London email to DII employee John Quinn making a similar request on April 8.

Quinn, who heads the enterprise application support group at DII, set off a chain of events that kept the accounts from being deleted. After receiving London's request, according to emails obtained by VTDigger, Quinn asked State Archivist Tanya Marshall that afternoon whether it was kosher.

"Can we do that for all user email archives that have been gone from state government for more than 3 years?" he wrote. "Obviously we would want to work with departments, but I wanted to get your take on it."

Marshall forwarded Quinn's message to her boss, Secretary of State Jim Condos, writing, "This is not okay and not in compliance with state law." Condos agreed. He quickly emailed London, Quinn, Boes, Marshall and others to call a halt to the process.

"I ask you not to delete ANY emails from any state employee until we meet to discuss further!" he wrote. "If any emails have already been deleted, please save a backup and journal! We do not believe this is in compliance with state law!"

Condos explained Sunday that he had no reason to believe anything "nefarious" was going on when he intervened. He said he was not aware at the time that the SEC was preparing to file charges. But he and Marshall were taken aback by the request, he said, because they did not believe they had signed off on an agreement with the governor's office about document retention and deletion.

"None of my staff was aware that this was coming," Condos said. "Our goal is to protect the state's records that need to be kept."

In justifying London's request, Coriell pointed to draft document retention schedules provided by the Secretary of State's office, which allow for such deletion after three years — or even earlier. He also provided a memo authored by London's predecessor, Beth Robinson, soon after Shumlin took office in January 2011. That memo, largely based on former governor Jim Douglas' policy, provided for the immediate destruction of "obsolete" records.

"So, in fact, we had gone above and beyond the guidance issued by the Secretary of State's Office by keeping these routine emails not involving the Governor for over three years," Coriell said. "As you'll understand from reviewing the retention schedules, we were surprised that the Secretary of State was surprised that we would try to comply with the guidance his office had provided us. However, given the Secretary's expressed concern, we took no action and did not delete any emails."

According to Condos, those documents were merely drafts — and no final accord had been approved by the two offices.

"We want to make sure that the policy is in place and that it's been approved by the state archivist, and at that point they'll be free to move forward," the secretary of state said. "Until we have that taken care of, we're asking them to go slow."

Those hoping to succeed Shumlin as governor quickly seized upon the VTDigger story over the weekend.

Republican Bruce Lisman, a retired Wall Street banker, slammed Shumlin on Saturday for refusing to return campaign contributions he received from the developers — and he questioned the administration's motives in seeking to delete the accounts.

"The attempts by the administration to destroy e-mails possibly related to this scandal days before the SEC filed its charges are wholly unacceptable," Lisman said in a written statement. "Such conduct raises very serious and disturbing concerns. It is imperative that all e-mails and other records be preserved relating to the administration's lengthy and in-depth dealing with Messrs. Stenger, Quiros, their businesses and agents."

Democratic gubernatorial candidate Peter Galbraith, a former state senator and ambassador, has also been critical of the Shumlin administration's actions. He announced plans over the weekend to hold a Monday afternoon press conference "calling for an independent commission to investigate Vermont state government's role in the alleged fraud."