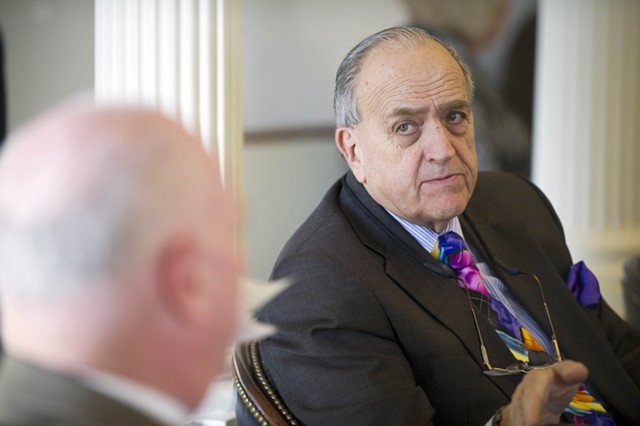 A week and a half after she was appointed to complete former senator Diane Snelling’s term, Sen. Helen Riehle (R-Chittenden) finally received a second committee assignment.

Lt. Gov. Phil Scott announced Friday morning on the Senate floor that, in addition to serving on the Natural Resources and Energy Committee, the South Burlington Republican will sit on the Education Committee. There, she’ll replace Sen. Dustin Degree (R-Franklin), who was shifted to the powerful Senate Finance Committee.

The changes, which were approved in secret by the Senate’s three-member Committee on Committees, took at least one member by surprise. After Scott made the announcement and the Senate adjourned for the week, Sen. Ann Cummings (D-Washington) confronted Senate President Pro Tempore John Campbell (D-Windsor) on the floor.

“It would have been nice to know. That’s all,” she told Campbell, who serves with Scott on the Committee on Committees. “I’m learning a lot about being a team player.”

Cummings, who chairs the Education Committee, explained later that she was upset that she had only just learned of the changes.

“It’s a simple matter of protocol,” she said. “It’s just common courtesy to let a chair know when you’re changing her committee.”

Precisely when the Committee on Committees made its decision wasn’t quite clear. Seven Days has repeatedly questioned its closed-door nature and requested notice of when meetings would occur. The newspaper was shut out of a previous meeting last week, during which the committee settled on other assignments.

The third member, Sen. Dick Mazza (D-Grand Isle), said he couldn’t recall when the committee decided on the latest round of changes.

“I don’t know. Last week? Sometime. This week? I don’t know when it was,” Mazza said. “We’ve been meeting off and on. We just came up with the names.”

Campbell was a little more certain.

“It was decided when we met yesterday and then also this morning,” the pro tem said. “As far as those meetings, I’ve never seen ... when we announce them. These are personnel issues. I think they’re ones where they’ve always been in private meetings.”

The lieutenant governor had a different recollection. Scott provided Seven Days with a signed, typewritten statement explaining the order of events.

“We made these appointments through individual conversations with each other over the past few days,” he wrote in the statement. “It’s difficult to find a time when all three of us can meet, so we talk in pairs until we come to an agreement. No formal committee vote is needed, simply an agreement on the appointment between the three of us.”


Corrected April 8, 2016, at 3:48 p.m. to reflect the fact that Scott announced the committee changes on the Senate floor.