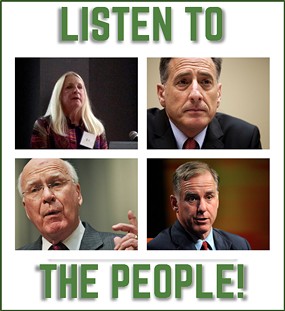 “Vermonters are disappointed that, despite our popular support for Sen. Sanders, in your capacity as superdelegates, you continue to pledge your support for Democratic candidate Hillary Clinton,” it reads. “We call on you, to [honor] democracy in action by casting your superdelegate vote for our fellow Vermonter Bernie Sanders.”

Vermont will send 26 delegates to the July convention in Philadelphia. Eleven pledged delegates were allocated to Sanders on Election Day. Another five pledged delegates will be chosen at a June 11 meeting, though those are almost certain to go to Sanders. Of the 10 remaining superdelegates, six have said they’ll support Sanders: Congressman Peter Welch (D-Vt.), Vermont Democratic Party chair Dottie Deans, vice chair Tim Jerman, Secretary of State Jim Condos, DNC member Rich Cassidy and, of course, Sanders himself.

Dean did not respond to a request for comment, but he indicated on Twitter last month that he was holding fast. Asked by a Sanders supporter whether he would “represent the people” or vote for Clinton “no matter what,” Dean responded, “Super delegates don’t ‘represent people.’ I’m not elected by anyone. I’ll do what I think is right for the country.”

According to Shumlin spokesman Scott Coriell, the current governor also continues to back Clinton.

“She is currently leading in pledged delegates,” Coriell said in a written statement. “To his knowledge, there has not been a scenario in recent history where superdelegates vote against the candidate who wins the most delegates and votes. He doesn’t expect that to change this year.”

Gosh, a longtime Clinton supporter, said she “absolutely” intends to vote for Clinton at the convention, “because I think she’s the strongest candidate in the race and she is going to be the winner.” The Brookfield resident noted that, in 2008, when Barack Obama won Vermont’s Democratic primary, she still planned to vote for Clinton — until the candidate released her supporters on the second day of the convention.

“If Bernie Sanders has a majority of the pledged delegates, of course I’m going to support him — and I presume the rest are going to support him,” Gosh said. “That is not going to happen. The numbers aren’t there. And that is why now they’re trying to get superdelegates to change their allegiance.”

To that, Gosh says, “No. Fourteen percent of our electorate in Vermont voted for Hillary. I’m going to represent that 14 percent.”

Leahy appears to be the only one whose position has shifted. At a February press conference in Burlington, he said he would “never break [his] word” that he’d support Clinton. Asked specifically whether he would back Sanders at the convention if the senator won in Vermont, Leahy said, “No, I’m voting my conscience, and I’m voting my commitments, and I made sure everybody knows what my conscience and what my commitments say.”

The next month, his top political aide, Carolyn Dwyer, told the Associated Press that, while Leahy had “given his personal support” to Clinton, “His delegate vote will go to the candidate with the most pledged delegates at [the] convention.”

When Seven Days followed up at the time, Dwyer said that though there “has obviously been some confusion” about Leahy’s intentions, “His position has not changed.”

Dwyer said Friday that Leahy still plans to support the candidate with the most pledged delegates.

“Sen. Leahy is proud of the Democratic primary, both the vigorous debate of the issues by the candidates and the passionate engagement of the voters,” she said. “It is important to remember that either Bernie or Hillary would be infinitely better for our country than the candidates the Republican Party has to offer. Sen. Leahy is committed to doing everything he can to elect a Democrat in November.”