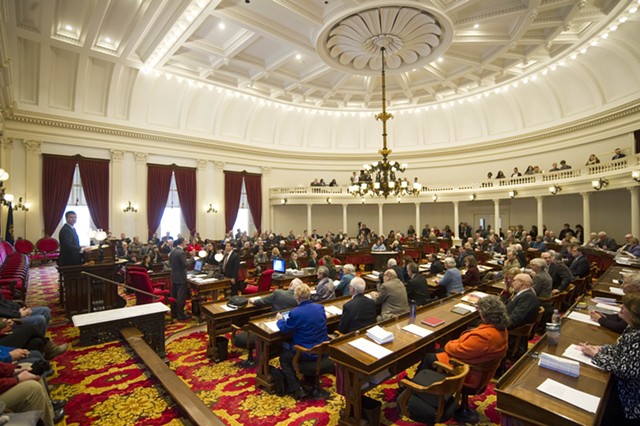 House Judiciary Committee Chair Maxine Grad (D-Moretown) outlined a new bill late Wednesday that would decriminalize the cultivation of up to two marijuana plants but would not legalize the drug.

Grad’s proposal will serve as a starting point for the 11-member committee as it nears decision time on whether to change the state’s marijuana laws. The panel appears unwilling to embrace a Senate-passed bill that would legalize sale and possession of marijuana starting in 2018.

Whether a majority of the House committee will find Grad’s plan too liberal, too conservative or just right remains unclear. The committee broke for the day immediately after Grad presented her bill.

“I know it will not go as far as some people will go, but it goes further than other people would like to go,” Grad told her committee.

Earlier Wednesday, several members of the committee made clear they want to pass no marijuana legislation, Grad said. Others, including her, want to respond to some of the concerns they have heard about drugged driving, a lack of drug prevention programs and the need to prepare for eventual legalization, she said.

Grad’s bill includes no triggers for legalizing sale and possession if neighboring states do, as she’d indicated was a possibility on Tuesday. Instead, she calls for establishing a committee to recommend how the state should prepare for legalization.

Grad’s bill calls for spending $350,000 on drug prevention programs. Without a plan to legalize and tax marijuana, however, it’s unclear where that money would come from.

It also establishes a new, lower 0.05 blood alcohol level for driving under the influence when combined with the presence of marijuana in the system.

Grad’s bill answers complaints that marijuana users shouldn’t have to rely on the black market. But those growing or using marijuana could still be subject to a civil fine under the bill.

For legalization advocates, the plan appears to fall far short of their goals, though they’ve long known legalization faced tough odds in the House. Grad appeared to craft her proposal without consulting either legalization lobbyists or Gov. Peter Shumlin’s administration, both of which worked closely with the Senate on that chamber’s bill.

Grad’s committee is expected to debate the proposal Thursday. She said she hopes the panel will vote on something by the end of the week.