Cory Booker to Raise Money for Patrick Leahy in Vermont 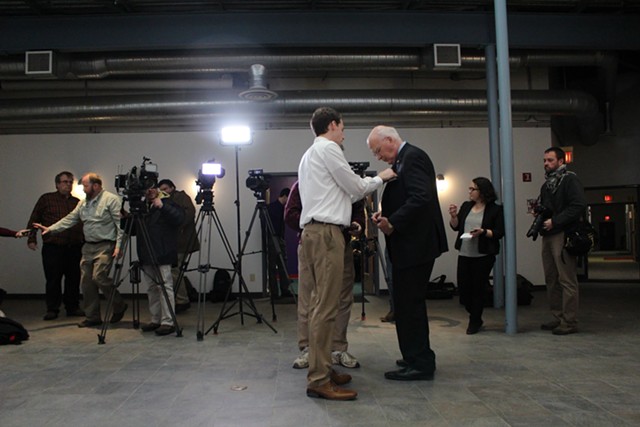 A rising star in the Democratic Party plans to help Sen. Patrick Leahy (D-Vt.) raise money for his reelection campaign next month at a pair of Vermont fundraisers.

Sen. Cory Booker (D-N.J.), the former mayor of Newark and a potential vice presidential pick, is scheduled to headline a reception May 2 at the Burlington home of Sarah Muyskens and Michael Green. According to Leahy aide Carolyn Dwyer, the senators plan to “promote their work on criminal justice reform” while collecting cash for Leahy’s eighth Senate campaign.

“There is no question Sen. Leahy’s leadership in the fight to secure a vote on President Obama’s Supreme Court nominee makes him a target for the conservative super PACs that have already spent over $2.5 million on the New Hampshire Senate race,” Dwyer says, referring to her boss’ role as ranking member of the Senate Judiciary Committee. “Sen. Leahy has never taken an election for granted and will raise the resources necessary to respond to whatever his opponents and the conservative groups throw his way.”

Some were also invited to a more exclusive, $1,000-per-person dinner to follow the reception.

“The dinner is a small, informal gathering, a mix of friends and supporters,” Dwyer says. “It is not strictly a fundraiser [though] some who have expressed interest in supporting the senator’s reelection efforts were given a suggested contribution.”

Leahy reported having $2.7 million in his campaign account at the end of 2015. In the five years since he was last reelected, he has raised $2.9 million, $956,000 of which came from political action committees. He currently faces no opposition, though 2014 Republican gubernatorial candidate Scott Milne has expressed interest in the race.