Vermont to Consider Purchase of Hydroelectric Dams | Off Message 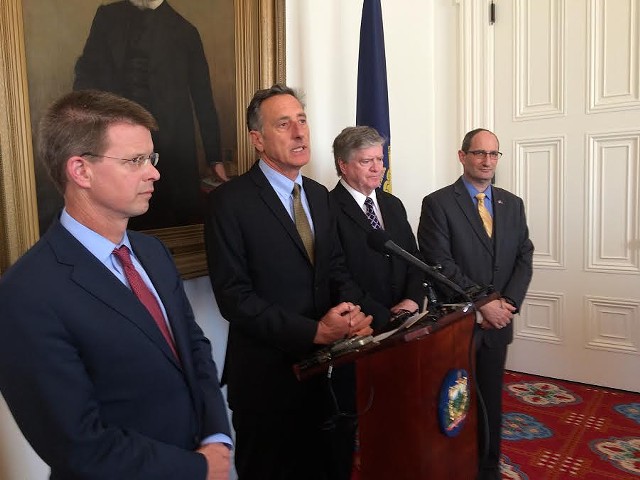 Gov. Peter Shumlin and the leaders of the House and Senate agreed Tuesday that the state should consider purchasing the hydroelectric dams on the Connecticut and Deerfield rivers. Their owner, TransCanada, has announced it wants to sell 13 dams.

Shumlin, House Speaker Shap Smith (D-Morristown) and Senate President Pro Tempore John Campbell (D-Windsor) announced that a seven-member working group will examine either a purchase or entering into a partnership to buy the dams. The panel will report back before the legislature adjourns to give lawmakers an opportunity to authorize next steps.

“We have to do whatever we can to make sure this isn’t a lost opportunity,” said Smith.

Secretary of Administration Justin Johnson will head up the working group, which will include State Treasurer Beth Pearce as well as members with economic, energy and business expertise.

The state investigated acquisition of these same dams in 2003 when the dams’ owner, USGen New England, declared bankruptcy.

Vince Illuzzi, then a Republican senator and chair of the Senate Institutions Committee, pushed for the purchase. He bucked the initial skepticism of then-governor Jim Douglas and persuaded the legislature to set up the Vermont Renewable Power Supply Acquisition Authority to explore its feasibility.

Illuzzi said he backed the move because “it is the cleanest and greenest energy around.” The dams were then in “top-notch condition,” he said.

Mike Smith, secretary of administration for Douglas, became chair of the authority. It hired a consultant and conducted an analysis over the summer and fall of 2003. Smith recalled Tuesday that the panel concluded the state couldn’t afford the purchase on its own.

But the state found partners in Brascan Power and Emera, both Canadian power companies, and submitted a joint bid. It fell well short of the $505 million of TransCanada Hydro Northeast’s winning bid.

In a phone interview Tuesday, Douglas said he remained skeptical throughout the previous evaluation, “but I wanted to give it a fair opportunity.” Douglas hasn’t changed his mind about public ownership of power-generating facilities, he said. “It is better to have the private sector undertake the risk, not taxpayers,” he said.

Smith, however, argued that publicly owned power could be an asset that would benefit the state’s clean-energy future and economic development goals. And he noted that the state has a long history of public ownership of generating facilities, citing the Burlington Electric Department and various electric cooperatives.

Campbell said he has asked several committees to take related testimony and to be ready to respond to recommendations from the working group. Two committees held a joint hearing Tuesday afternoon.

Lt. Gov. Phil Scott, a Republican candidate for governor, supports a review of the possible risks and benefits of a purchase. He also wants electric utilities in the state to conduct their own review to see whether they could lower electricity rates if they bought the dams.

Green Mountain Power had “significant concerns” about potential state acquisition 13 years ago, but supports the Shumlin administration’s decision to vet the new opportunity, to “see how it connects with our commitment to keep costs down for Vermonters while investing in a cleaner energy future,” said Dottie Schnure, company spokesperson.

Said Shumlin: “I feel like we missed an opportunity last time around to purchase these assets.”