McAllister, Accuser Tangle in Court Over Eviction | Off Message 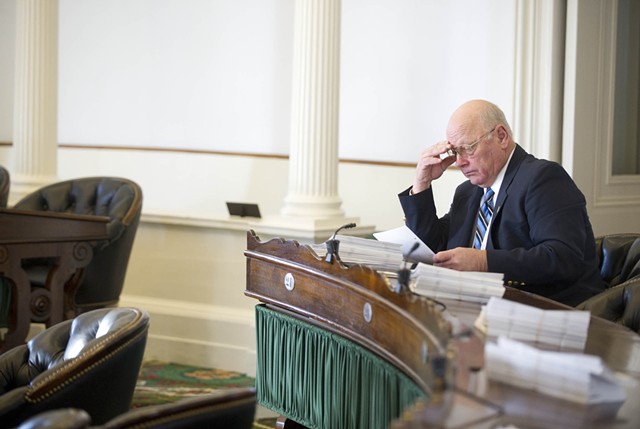 Nearly a year after Sen. Norm McAllister's (R-Franklin) arrest on sexual assault charges, he's involved in a separate court battle with one of his accusers — a woman he's trying to evict from a trailer on his Highgate farm.

McAllister filed legal papers in February seeking to evict the woman from the trailer where she has lived for more than three years. The woman has now counter-sued, seeking to halt the eviction and asking for damages, according to court papers filed by her Burlington attorney, Andy Montroll.

In the new court case, first reported Monday by Vermont Public Radio, the woman alleges that McAllister turned off the water to her trailer in an illegal attempt to evict her.

"That's another crock," McAllister said by phone Monday. He said Vermont State Police came to his house about a week ago to tell him the water had been shut off at the trailer. When he checked, he said, he saw that an electric breaker had tripped. The nearly new pump came back on as soon as he reset it, he said.

The trailer is about half a mile from his house, McAllister said.

McAllister was arrested last May on sexual assault charges involving the tenant and a second woman who worked as his assistant at the Statehouse. The Senate voted in January to suspend him from office while the charges are pending. The criminal case is scheduled for trial next month in Franklin County.

In a civil suit filed last year, the tenant reiterates many of the allegations made in the earlier criminal case. She alleges that McAllister forced her to have sexual relations with him more than 70 times over two and a half years and that he once coerced her to have sex with another man in return for rent.

McAllister has claimed that the tenant's sexual assault accusations were made only after he tried to get the woman and a man who lived with her to pay rent. "It's all about money. As long as they were living there for free, they had no complaints. That started when I asked for rent," he told Seven Days last October.