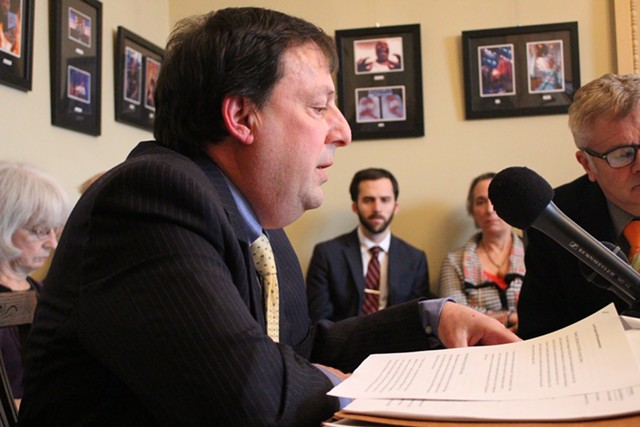 The commissioner of the Vermont Department of Public Service defended himself Thursday against charges that he stripped self-critical language from a report submitted last month to the legislature.

Speaking in a crowded Statehouse committee room filled with energy activists and industry lobbyists, DPS Commissioner Chris Recchia said he made "no apologies for the process used, the resulting content or the recommendations ultimately presented" in a report addressing whether his department adequately represented ratepayers.

Sen. Tim Ashe (D/P-Chittenden) had called Recchia before the Senate Finance Committee to address a recent Vermont Public Radio story suggesting that Recchia had overruled his staff in order to mute recommendations from the department's critics. Quoting report drafts and emails obtained through public records requests, VPR's Taylor Dobbs reported that the commissioner had removed reform recommendations after taking charge of the report.

Though DPS is charged with representing the public interest in the energy and telecommunications arenas, critics have long charged that it actually represents the views of the governor who appoints the department's commissioner. Among the recommendations scrubbed from the report were those that sought to shield DPS' public advocacy staff from political pressure.

Recchia told committee members that nothing "nefarious" had occurred in what he called a standard, if "messy and complicated" editing process, and he alleged that his department's actions were "taken out of context" by the station. Calling his release of early drafts an "unprecedented" show of transparency, he urged the senators to avoid reading too much into what did — and didn't — make it into the final cut.

"I think we all are, or need to be, mature enough to say, 'This is how discussions and debate in an open society occur,'" Recchia said. "And if you want these documents and all to be transparent, better get used to the idea that there's going to be some disagreements, and there's not going to be a clear line from point A to point B."

Elaborating to reporters after the hearing, Recchia said that VPR "came into the story with a particular bias" and ignored "lots of other evidence that could have been looked at to paint a completely different picture."

"There was a preconceived desire to describe a particular scenario," he said. "And I think, from the same data, one could reach multiple other scenarios that would have been more accurate."

"I respect the commissioner's viewpoint, but we did not come to the story with a preconceived idea," he said. "We've posted many of the documents on our website and readers can judge for themselves."

Recchia's report came in response to legislation passed last year requesting an evaluation of "the pros and cons of various forms of ratepayer advocate offices." Ashe, who drafted that legislation, said Thursday that his committee would look not only at DPS' final report but at the earlier staff recommendations that were ultimately rejected.

"A number of us are already concerned that we need to be a little bit more aggressive on the ratepayer advocacy front," he said.

After the hearing, during which senators took no action, Ashe said he had no reason to doubt Recchia's story.

"When a person comes to the end of the table and tells us that he or she is telling the truth and giving an accurate representation of events, I am always inclined to believe the person is telling the truth," he said, adding that only department staff members knew the exact nature of the process. "I'm going to take the commissioner at face value, but know we still have to do work on the ratepayer advocacy front."