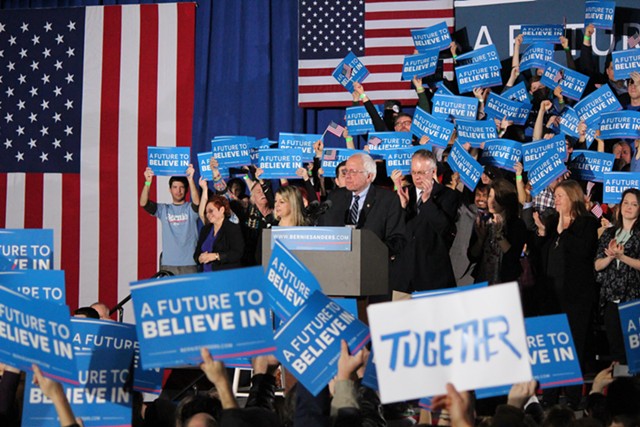 In Tuesday's battle for the West, Sen. Bernie Sanders (I-Vt.) won lopsided victories in the Utah and Idaho caucuses, but he fell to former secretary of state Hillary Clinton in delegate-rich Arizona.

After losing five states in a single night last week, Sanders needed to notch some wins Tuesday — and he did: Utah and Idaho voted nearly 4-to-1 in his favor. With 11 pledged delegates left to be apportioned in those two states by Wednesday morning, Sanders was leading Clinton there by a margin of 35 delegates to 10.

Despite campaigning hard in Arizona during the past week, Sanders lost that state by a margin of 58 to 40 percent. Clinton was on track to pick up at least 41 delegates there to Sanders' 22, with 12 yet to be apportioned.

In a statement released early Wednesday morning, Sanders said he was "enormously grateful" for the "tremendous voter turnouts" that led to his victories in Utah and Idaho.

"The impressive numbers of young people and working-class people who participated in the process are exactly what the political revolution is all about," he said. "These decisive victories in Idaho and Utah give me confidence that we will continue to win major victories in the coming contests."

Tuesday's split decision, in terms of delegate allotment, was good news for Clinton, who looked likely to maintain her significant lead. According to an Associated Press tally, she had accrued 1,214 pledged delegates, while Sanders had just 901. Clinton also led her rival among superdelegates 467 to 26, according to the AP. A candidate needs 2,383 delegates to win the Democratic nomination.

According to most estimates, Sanders would need to win at least 60 percent of all remaining un-apportioned delegates to erase Clinton's pledged delegate lead — and he would still have to convince many superdelegates to change their minds.

The race now turns to Washington, Alaska and Hawaii, all of which vote Saturday.

Tacos, Enchiladas and Tequila Cocktails To-Go at the Big Spruce in Richmond

Plenty of Police, but No Protesters, Turn Out at Vermont Statehouse on Sunday
Top Stories