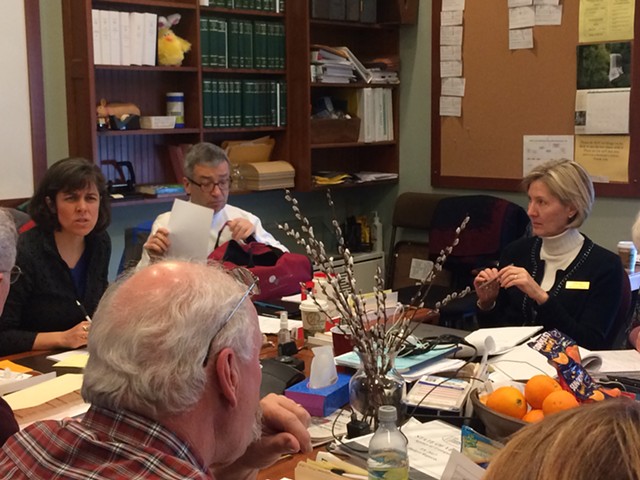 After three months of work, the House Appropriations Committee voted 10-1 Monday on its version of a budget to operate state government next year.

The $5.77 billion budget — which includes federal fund allocations plus education and transportation spending — is 2.6 percent higher than this year’s budget.

Rep. Martha Feltus (R-Lyndonville) was the lone dissenter. She said she couldn’t go along with increasing spending from the General Fund by 4 percent. The General Fund comes from income and sales taxes. With state tax revenues increasing at just 2.2 percent, she argued that spending should have been reined in.

House Minority Leader Don Turner (R-Milton) had pressed Republicans on the House Appropriations Committee to oppose the budget bill if it increased spending beyond the revenue that would be available before any taxes and fees were raised. However, of the four Republicans on the committee, only Feltus voted against the committee’s plan.

Rep. Bob Helm (R-Fair Haven) said the 2.6 percent increase for the total budget was an achievement. “We Republicans had a lot of effect this year,” he said. He credited the Democrats with listening to him and his Republican colleagues. “You have to respect that.”

The House budget, like the spending plan Gov. Peter Shumlin presented in January, requires new revenues. The House Ways and Means Committee approved a fee and tax package last week that would raise $48.3 million. The sources of revenue include an increase in the franchise tax on big banks, revisions in the way employers are assessed for workers without health insurance, an increase in the gross-receipts tax on fuel, an increase in the fee on mutual funds and a slew of fee increases at the Department of Motor Vehicles.

Rep. Mitzi Johnson (D-South Hero), chair of the House Appropriations Committee, noted Monday that her committee’s budget didn’t need all the money that Ways and Means raised. It “returned” $1.3 million.

The House Ways and Means Committee will discuss Tuesday what changes it might make to its tax and fee package, Rep. Carolyn Branagan (R-Georgia), committee vice chair, said late Monday.

While the Appropriations Committee spent much of Monday proofing the budget document, the panel did wrestle one last time with one of the tough choices it had faced. Rep. Matt Trieber (D-Bellows Falls) wanted to be sure the committee sent a clear message to the administration about its funding decision on weatherization and the Low Income Home Energy Assistance Program.

Ways and Means increased the gross receipts tax on fuel to make up for a loss of tax revenues for weatherization work because of lower fuel prices. Trieber suggested the language in the bill might — contrary to what Trieber believed were the committee’s wishes — let the administration move some of that money to the LIHEAP program to provide heating assistance to Vermonters who don’t qualify for the aid under federal guidelines. The state has long extended LIHEAP assistance to those with incomes between 150 and 185 percent of the federal poverty level. The administration might also use some of the money to cover higher administrative costs than federal guidelines allow.

Rep. Mary Hooper (D-Montpelier) pressed the committee to stick with the position she believed it had adopted Friday — that all the new funding from the increase in the fuel gross receipts tax would go to weatherization. “It is absolutely the best investment,” Hooper said.

She acknowledged that this choice would mean there wouldn’t be enough money to cover costs for the expanded heating assistance the state has offered for a decade. “That means there may be some Vermonters who are cold next winter,” she said.

The committee agreed with Hooper that the funding should go to weatherization.

The panel also took a tough stance with its colleagues on the House Health Care Committee. The health care committee wants an independent evaluation of Vermont Health Connect, the state’s troubled online health insurance marketplace. The price tag for the study is about $500,000.

Johnson said her committee’s budget doesn’t include any money for this study. If the Health Care Committee wants it, she said it would need to find savings to cover the cost.

Johnson noted that many House committees provided the budget writers with their priorities, but failed to offer savings. She said the sum of all the committees’ priorities was far more than the state could afford.

House members will get their first look at the budget bill Tuesday. They need to read fast because the first vote on the package is scheduled for Wednesday – if Republicans agree to suspend rules.