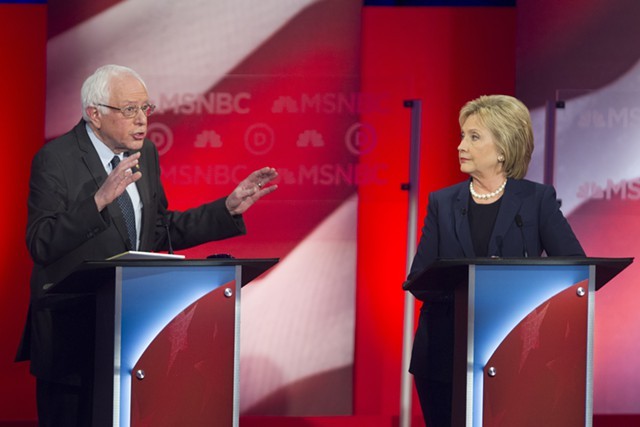 Though the February filings are already out of date, they paint a picture of just how much money flowed through the campaigns as the two candidates competed in the early-voting states of Iowa, New Hampshire, Nevada and South Carolina. They also show that, despite Sanders' fundraising advantage, Clinton entered March with more money in the bank than he did: $30.8 million to his $17.2 million.

According to his filing, Sanders raised $43.5 million in February, bringing his total campaign haul to $136.6 million. The senator from Vermont spent $40.9 million that month and has dropped $120.9 million since launching his campaign last April.

For her part, Clinton raised $29.5 million in February and $145 million throughout her campaign. She spent $31.6 million last month and $123.3 million since the start of her campaign.

According to the Sanders campaign, it raised 96 percent of February's 1.5 million donations over the internet. Only 195 people contributed the maximum allowable amount of $2,700, meaning that the vast majority of Sanders' donors could keep on giving.

After filing the February report Sunday night, the campaign offered a sneak preview of March's fundraising progress, announcing in a press release that 30 percent of the campaign's donors this month had not previously contributed.

"Our grassroots donors are paving the way for this campaign to compete strongly all the way through the Democratic National Convention in July," campaign manager Jeff Weaver said in a written statement.

While Clinton has not had as much success as Sanders in courting small-dollar donors, her spokespeople said Sunday that more than a million people had contributed to her campaign. Clinton raised half of her money last month over the internet and took donations from 365,000 people in that period.

"Thanks to the 1 million people who have now contributed to our campaign and the more than 8.6 million people who have supported Hillary Clinton with their votes, we have the resources we need to continue to run a strong campaign all across the country and a nearly insurmountable pledged delegate lead," Clinton campaign manager Robby Mook said in a written statement. "With the majority of our fundraising coming from grassroots online donations, this campaign continues to gain momentum and feed off the energy of millions of supporters across the country."