In Miami, Sanders and Clinton Spar Over 30-Year-Old Cuba Comments | Off Message

In Miami, Sanders and Clinton Spar Over 30-Year-Old Cuba Comments 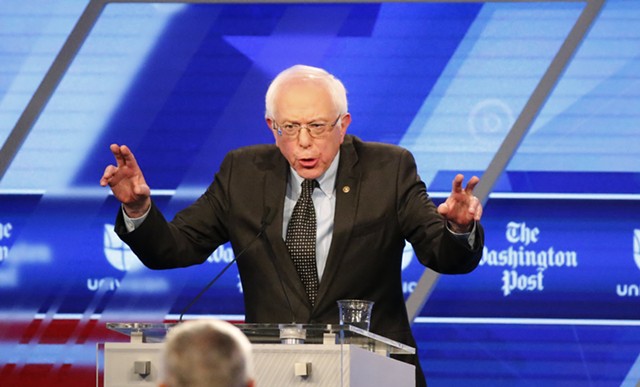 The hosts of Wednesday’s Democratic presidential debate in Miami took a trip down memory lane — all the way back to 1985 Burlington.

As Sen. Bernie Sanders (I-Vt.) and former secretary of state Hillary Clinton courted Hispanic voters at the Univision-sponsored debate, its moderators played a 30-year-old video from the archives of a Burlington public access station. In an interview with CCTV Center for Media & Democracy executive director Lauren-Glenn Davitian, Sanders praised Cuba’s then-president Fidel Castro for providing health care and education to his people.

Clinton seized the opportunity to tie Sanders to the communist dictator.
“I think in that same interview, he praised what he called the ‘revolution of values’ in Cuba, and talked about how people were working for the common good, not for themselves,” Clinton said. “I just couldn’t disagree more.”

Sanders responded that Cuba is “of course, an authoritarian, undemocratic country.”

“I hope very much, as soon as possible, it becomes a democratic country,” Sanders said. “On the other hand, it would be wrong not to state that, in Cuba, they’ve made some good advances in health care ... They have made some progress in education.”

After the debate, Sanders’ campaign dispatched a press release seeking to clarify his 30-year-old comments.

“Sen. Sanders was actually arguing against the failed foreign policy of Ronald Reagan, which was imperiling the US at home and abroad,” the statement read. “Sen. Sanders pointed to past US mistakes in Cuba to warn that a US military intervention may not turn out positively for our country.”

The debate came a day after Sanders surprised the country by winning the Michigan Democratic primary, which pollsters predicted he would lose by 20 percentage points. Addressing the outcome, Clinton would not acknowledge that anything had gone wrong in Michigan.

“It was a close race,” she said. “I was very pleased with the overall outcome.”

Sanders declined to bite when asked whether he really had a path to victory, despite trailing Clinton by more than 200 pledged delegates to the Democratic National Convention.

“When we began this race, I was at 3 percent in the polls,” Sanders said. “We’re going to continue to do extremely well.”

Sanders repeatedly brought the debate back to Wall Street, portraying Clinton as a friend to the financial industry.

“Secretary Clinton was one of those who voted to bail out Wall Street,” Sanders said.

He reminded his audience that he would tax financial speculators to pay for free public college. Clinton, in turn, argued that Sanders’ education and universal health care plans would cost more than her opponent would admit.

“What Secretary Clinton is saying is the United States should continue to be the only major country on Earth that doesn’t guarantee health care,” Sanders countered.

“I do believe in universal coverage. Remember, I fought for it 25 years ago. I believe in it,” Clinton responded. “I think the smart approach is to build on and protect the Affordable Care Act.”

Moderators pushed both candidates to address some of their greatest vulnerabilities. Asked why people seem to mistrust her, Clinton said she took responsibility for those perceptions.

“I am not a natural politician, in case you haven’t noticed, like my husband or President Obama,” she said. “So I have a view that I just have to do the best I can, get the results I can, make a difference in people’s lives, and hope that people see that I’m fighting for them and that I can improve conditions economically and other ways that will benefit them and their families.”

Sanders, too, was questioned about being a career politician, having served nearly a quarter-century in Congress.

“You’ve got to look at what the career is about. I don’t take money from the pharmaceutical industry because I believe they are ripping off the American people,” he said. “Look at the record. It is a record that I am proud of.”