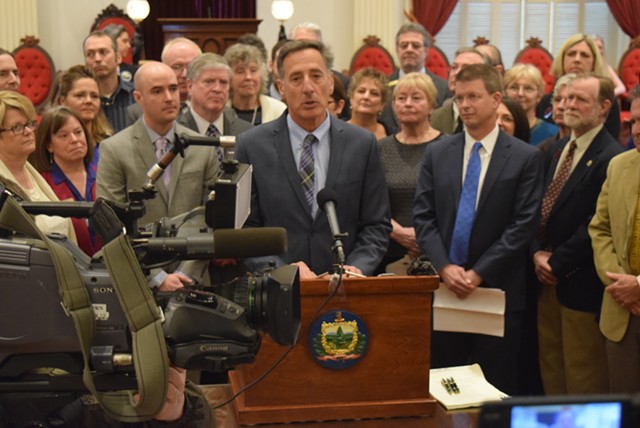 "It's a basic right," Shumlin said. Some 60,000 Vermont workers lack paid sick leave for when they or their children are sick, he said.

The law requires employers to provide at least three days a year to full-time workers starting next year and five days a year starting in 2019. Part-time workers must be offered the equivalent prorated time off. The organization Main Street Alliance of Vermont, which pushed for the measure, has posted a question-and-answer explanation of the law on its website.

President Barack Obama made the unusual move of issuing a press release praising Vermont's law. "I’m once again calling on Congress to help us catch up with other advanced nations and provide this basic security to all Americans. Until Congress acts, I urge other states to follow Vermont’s lead," Obama said.

So many legislators and advocates wanted to get in on the bill signing that it was held in the larger House chamber instead of governor's office. Many there — including Shumlin — had been reluctant to support early versions of the bill. Sen. Bill Doyle (R-Washington), who weeks earlier had delayed action on the bill on the Senate floor, sat front and center.

Before Shumlin signed the bill, some indicated they plan to push for more employee benefits. The advocacy group Rights & Democracy launched a Raise Up Vermont campaign Wednesday. Organizers plan to push for paid family and medical leave, a livable minimum wage and stronger laws around the use of independent contractors.