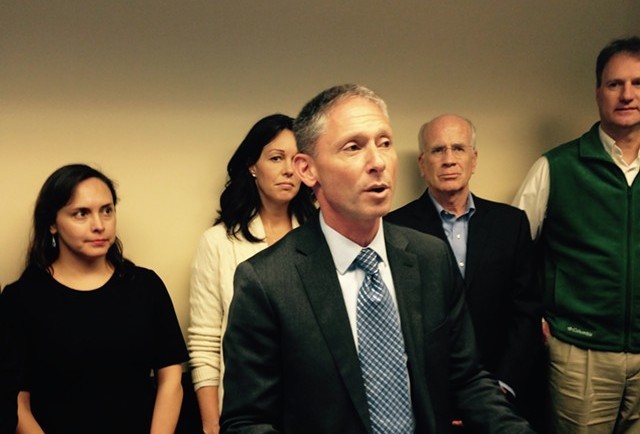 Burlington will train 400 new tech workers during the next four years under a White House initiative announced Wednesday.

The designation of Burlington as a White House TechHire Community will help the city foster high-paying jobs and assist Vermont tech employers in filling the ones they are already advertising. That's according to local leaders who spoke during a press conference at the Lake Champlain Regional Chamber of Commerce.

BTV Ignite executive director Michael Schirling celebrated the designation, which the nonprofit had sought for months. "We are excited today that it's finally come," he said.

The designation does not come with direct funding. Programs will be supported by $3 million in U.S. Labor Department money that passes through Vermont HITEC in Williston, according to Schirling. BTV Ignite plans to apply for a $4 million federal grant later this week. If it gets it, the training effort could grow substantially, Schirling added.

The TechHire program is intended to increase the number of skilled workers through computer-coding boot camps, apprenticeships, and other targeted training and education.

The city and the state need to work harder to broaden the Vermont brand, suggested Chris Yager, an executive at Dealer.com who was among the tech leaders, education officials and politicians who spoke at the event.

"Think about Vermont for a moment. What comes to mind?" Yager asked. "Ski slopes, cheese, craft beer — a lot of the reasons we all love this state and we live here. There's one thing that doesn't get mentioned that needs to start being part of that description — and that's technology."

Several employers spoke of the difficulty of finding trained tech workers in Vermont, as well as recruiting them from outside. Hiring people "has always been a challenge," Yager said.

Dealer.com hired 280 people in Burlington last year and another 60 or so this year. The company still has 41 openings.

But Yager said he's encouraged to see more of an "ecosystem" of Vermont tech opportunities in the past few years, and urged local companies to keep working as a group. "The better we present ourselves as a whole," Yager said, "the more successful we will all be."