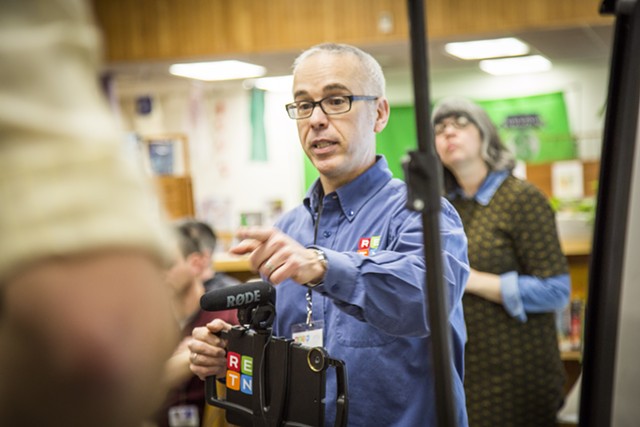 To prove a point, Doug Dunbebin once cracked an egg on his forehead. “This is the face of Burlington,” he said, goo dripping down his face. He argued that while local officials had squawked about the Iraq War, they failed to support efforts to keep the Vermont Air National Guard at home.

Dunbebin, a Progressive who served on the Burlington City Council from 2001 to 2003, was passionate politically, earnest about everything he did and full of life.

Friends and colleagues were shocked and saddened by Dunbebin’s death Friday of a sudden, undisclosed illness at age 53. He is survived by his wife, Trina Magi.

“It was totally unexpected,” said Scott Campitelli, executive director of RETN, the Burlington-based education television network where Dunbebin had worked since 2007. He said Dunbebin’s family had requested privacy and that funeral arrangements were pending.

Campitelli described Dunbebin as an outgoing, energetic colleague who biked to work 12 months of the year, loved to organize softball, bowling or golf games, and was always teaching others whatever he could.

“He had just a reservoir of patience that was amazing,” Campitelli said. “He liked people.”

Dunbebin was also passionate about politics and political causes. “Doug would often have a whole strategy of what candidates should be doing,” Campitelli said.

A former graphic artist, Dunbebin created a design and slogan that took off for Bill Clinton’s 1992 presidential campaign. It showed Clinton playing the saxophone with the phrase, “The Cure for the Blues.”

Dunbebin went on to protest the Iraq War, raise questions about the origins of the September 11, 2001, attacks and fight the Vermont National Guard's plans to host F-35 fighter jets here.

At a 2013 Burlington City Council public hearing on the F-35s, Dunbebin spoke against the jets, then remained seated before the microphone to play a recording of the jet’s noise for the audience. Both cheers and boos emerged from the crowd. As then-council president Joan Shannon tried to gavel him into silence after his allotted time was up, Dunbebin sat placid-faced and unmoved.

“I understand your anger,” he said, without raising his voice. “This is what people will feel every time they hear the planes take off.”

In a statement posted on the RETN’s website, the organization said, “Doug was a friend to many, a support to all, and a powerful force in helping people find their voice and speak their minds in our community. He will be deeply missed.”