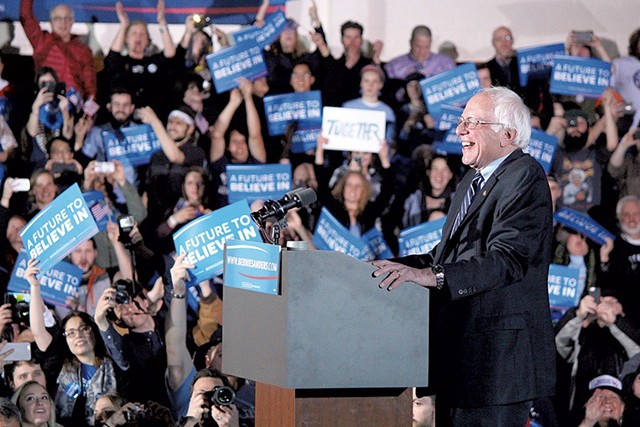 By late Sunday night, Sanders had won an additional 67 delegates to the Democratic National Convention, while Clinton had picked up another 64. Counting all 20 states and territories to vote thus far, Clinton was leading Sanders 671 to 476. It takes 2,383 delegates to win the Democratic nomination.

The Vermont senator won caucuses in Kansas and Nebraska on Saturday and then in Maine on Sunday — all three by healthy margins. But Clinton managed to match him for the weekend by winning delegate-rich Louisiana by an even wider margin of 71 percent to 23 percent.

Speaking Sunday night at a CNN debate in Flint, Mich., Sanders hailed his weekend victories, noting that turnout was especially high in Kansas and in Maine.

“I think we are exciting working class people, young people who are prepared to stand up and demand that we have a government that represents all of us and not just the few,” he said.

But Clinton’s allies argued that the math simply was not in Sanders’ favor. While the Democratic Party’s proportional allocation of delegates makes it easier for candidates to stay in the running, it makes it harder for them to catch up to a front-runner.

“While Sanders may claim a win or two, anyone looking at the delegate count can see the truth: his odds of taking the nomination are next to nil,” said Brad Woodhouse, president of Correct the Record, a pro-Clinton super PAC.

Counting superdelegates, the party leaders and elected officials who can vote for whomever they choose at the convention, Clinton’s lead is even greater: 1,130 to Sanders’ 499.

The contest now turns to Michigan and Mississippi, both of which vote on Tuesday. Sanders and Clinton have devoted tremendous time and resources to Michigan, which awards 130 pledged delegates — more than any state that has voted thus far, other than Texas.