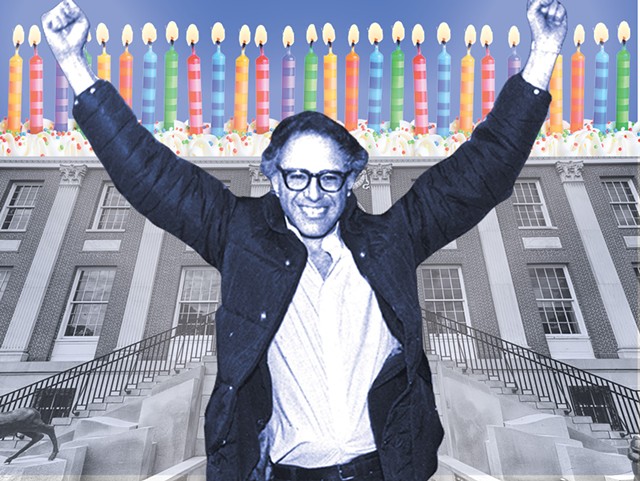 Thirty-five years ago today, a political revolution swept through Burlington. Against all odds, a 39-year-old independent who had lost four previous bids for statewide office ousted five-term Democratic incumbent Gordon Paquette to become the next mayor of the Queen City.

"It was an election beyond most people's wildest dreams," reporter Debbie Bookchin wrote at the time in the Vanguard Press.

At first, it appeared Sanders had won by 22 votes. After a recount, that margin dwindled to 10. Terry Bouricius, a Bernie Sanders ally who won election that night to the city council, recalled the moment five years ago in an interview with Seven Days' Shay Totten.

"We weren't expecting it, and it came as quite a shock to us that he won," Bouricius said. "It was so shocking, in fact, that the first thing we did was to get a court order to impound the ballots to be sure they were secured before a recount occurred."

Paquette spent the next day "cloistered in his office taking calls from well-wishers and visiting with a few old Democratic friends," Bookchin reported at the time. Across town, Sanders held a press conference to outline his priorities, which included establishing a Mayor's Advisory Council and reevaluating such city projects as the planned Southern Connector highway spur.

"We are attempting to do something that has not been done in many communities across the country, and that is to involve large numbers of people in the day-to-day affairs of government," Sanders said.

The mayor-elect made another thing clear: the WJOY-AM morning radio show previously known as "The Mayor Speaks" would now be called "The Public Speaks."

These days, of course, Sanders is fomenting a political revolution of a far greater magnitude: He's running for president of the United States.

"In 1981 it was all outlandish," Sanders alum John Franco recalled five years ago. "Today it is mainstream."