Why Did Black South Carolinians Snub Bernie Sanders? | Off Message 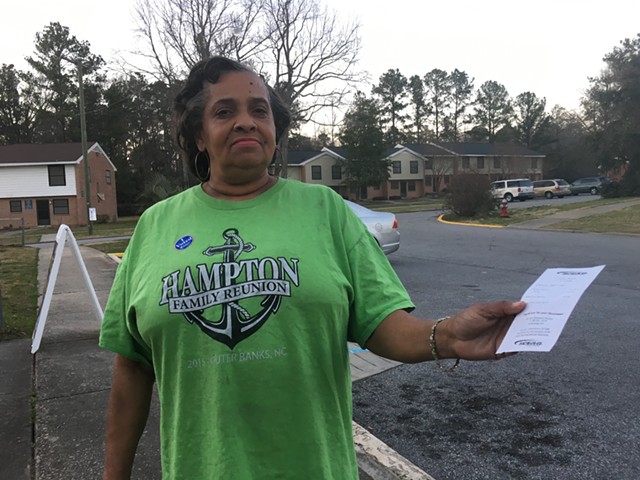 An hour before the polls closed Saturday, Wilhelmina Rivers walked out of the Latimer Manor Community Center in Columbia, S.C., with an "I Voted" sticker affixed to her bright green T-shirt.

"I decided to vote for Hillary, but it was a tossup between her and Mr. Bernie, cuz I really think he want to make a change," she said, referring to Democratic presidential candidates Hillary Clinton and Sen. Bernie Sanders (I-Vt.).

Top of mind for Rivers, a behavioral health specialist for the state Department of Mental Health, was the rising cost of electricity and health insurance, coupled with stagnant wages.

"We livin' from paycheck to paycheck," she said. "Our insurance is up — way up. It's like if you took a whole 'nother $150 out of my check, and I'm already struggling."

While Sanders' message appealed to Rivers, who is African American, she was ultimately swayed by the belief that Clinton was better equipped to get the job done.

"Mr. Bernie, I think he really focusing more on the wage than anything, but I just think she a little bit stronger," she said. "But I hope they work together, whichever one win."

Before driving away, Rivers grabbed a piece of paper from her white Kia sedan to show a reporter. It was a receipt from South Carolina Electric & Gas showing that her family owed $595.63 of a $763 bill.

"Who can afford that?" she said. "That's like buying a downpayment on the car every month."

By the end of the day, more than 73 percent of South Carolinians voting in the Democratic primary had joined Rivers in pulling the lever for Clinton, while just 26 percent voted for Sanders. Far more jarring for the Sanders campaign was the percentage of black voters who chose Clinton over him: 86 to 14 percent, according to exit polls.

"We're going to have to do a lot better," Sanders said Sunday morning on ABC's "This Week" when asked about Clinton's advantage with black voters. "But I think you're going to see us doing — and I think the polls indicated it — much better within the African American community outside of the Deep South. You're going to see us much better in New York State, where I think we have a shot to win, in California and in Michigan."

Maybe so, but Sanders faces more immediate challenges in Alabama, Arkansas, Georgia and Tennessee — four southern states with significant African American voting populations, all scheduled to vote on Tuesday. Sanders' trouble attracting black voters may explain why he's set his sights instead on the Super Tuesday states of Colorado, Massachusetts, Minnesota, Oklahoma and Vermont — most of which are northern and relatively white.

But if Sanders can't attract support from African Americans throughout the country, he will have a hard time arguing that he can defeat the Republican nominee in November. In 2012, Republican nominee Mitt Romney actually won the white vote; it was black voters who carried President Barack Obama to victory.

There is, of course, no single reason why a large and hardly monolithic group of voters chooses one candidate over another. But in interviews around Columbia on the day of the primary, many African Americans expressed the feeling that they could trust Clinton more than Sanders, because they had seen her fighting for them for years.

"I like them both. It was difficult, to say the least," said Kerry Gilliam, a 44-year-old surgical technology student at Midlands Technical College. "I pretty much made up my mind as of yesterday."

Gilliam, who also voted at the Latimer Manor Community Center, said he ultimately chose Clinton, because he believed she had been fighting for criminal justice reform longer than Sanders has.

"She's been on this issue as of the last almost 20 years," he said. "She never was in a gray area about where she stood on the issue."

At the nearby Hyatt Park Elementary School, Army veteran and retired state worker Floyd Williams said he had decided to support Clinton, in part, because he has fond memories of former president Bill Clinton's administration.

"He had a balanced budget," Williams said, adding, "I think she'd be her own person."

As for Sanders, the 81-year-old voter said of the 74-year-old candidate, "He got too much on his plate and he's a little too old. He'd have a heart attack with all the problems in the world."

Not everybody voting at the Martin Luther King Jr. Park community center, where Thomas cast his ballot, supported Clinton. Jacob Borchardt and his girlfriend, Lauren Hamm, said they had just enthusiastically voted for Sanders.

But Borchardt and Hamm, students at the nearby University of South Carolina, are white.

"To me, he seems like the only candidate who's saying anything different than they've always said. This is the first election I've really cared about," said Borchardt, a graduate student in archaeology. "The fact that he refuses to take money from lobbyists says a lot."

"Out of our friends, I would say almost all of them are Bernie supporters — and our family," said Hamm, who plans to pursue a masters at the University of Iceland.

As Borchardt and Hamm left the community center, two poll workers met Mable Davis Carter at the curb, to help her vote without leaving her car. She and her husband, Durham Carter — both of whom are African American — said they were voting for Clinton.

Durham Carter, an 87-year-old community leader and retired teacher, said he had been familiar with the candidate since Bill Clinton served as governor of Arkansas.

Mable Carter was quick to mention all the work her husband had done for the neighborhood. He was "instrumental," she said, in renaming the community center and park after King, noting that African Americans were not always welcome there.

"It has been a struggle for us as blacks," she said. "We feel that the Clintons and the Kennedys, regardless of what others may say or feel, our gut feeling is that they’ve done more for us as African Americans than any other president — all the rest of them put together. Let the record reflect.”