About 100 people marched through downtown St. Albans on Saturday afternoon in solidarity with Black Lives Matter VT as the group sought to draw attention to racism in schools.

Specifically, protesters wanted to highlight “the problem of racial bullying and harassment and excessive suspensions and expulsions of students of color in Vermont schools,” said a statement from Black Lives Matter.

Before the march, supporters of varying ages and ethnic backgrounds gathered at the Franklin County Senior Center, where Black Lives Matter VT activist Ebony Nyoni kicked off the event with a speech. Fellow activist Isra Kassim read the group’s list of demands for schools to implement. They include requiring school administrators and staff to “participate in annual cultural competency goals defined by people-of-color communities.”

Nadine Morales, who is part Puerto Rican, read a poem she wrote about growing up in Vermont. The 28-year-old St. Albans resident said that when she moved here from Springfield, Mass., about 16 years ago, she was asked if she was part of a gang and looked upon as if she were an illegal immigrant. 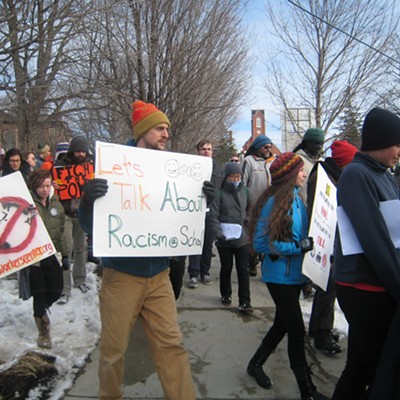 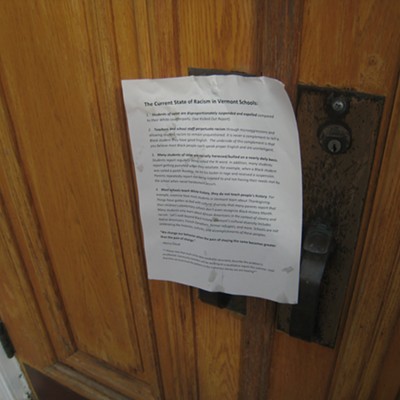 
Middlebury College student Charles Rainey, 18, recited a poem he wrote: “To be black means to sleep with one eye open/to be black is to be patient, to be tolerant, to wait your turn/to be black is to be the constant hanging elephant in the room/gently dangling from the most expensive chandelier situated at the center of the ballroom gala event/invite only. This event is an all-white affair...”

Mark Hughes, cofounder of the advocacy group Justice for All, also made an impassioned speech for systemic changes, and reminded his audience, “This is not a sprint, folks.”


During the march, Hughes led the crowd in singing songs such as “Keep Your Eyes on the Prize” and “Ella's Song,” and in chanting “Black Lives Matter!”

Protesters were concerned they might be heckled. Last December, a protest outside the school by Black Lives Matter VT drew jeers and insults, the news website VTDigger reported. A reporter Saturday saw no such reactions to the march. The group attracted some curious stares as they marched to Bellows Free Academy to hold another speak-out and sharing.