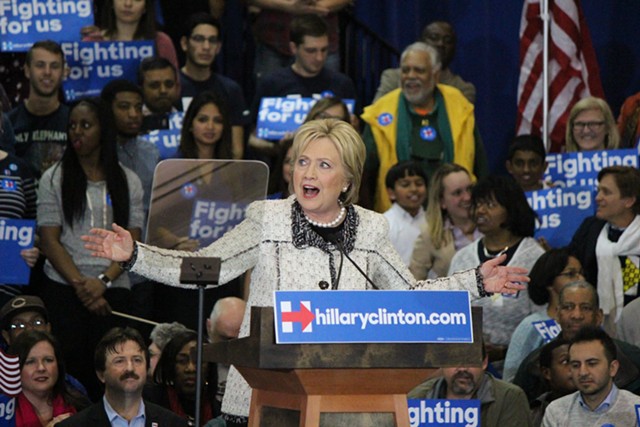 As she celebrated a jaw-dropping victory Saturday night in South Carolina, Democratic presidential candidate Hillary Clinton turned her gaze to the general election.

“Tomorrow, this campaign goes national,” she told a roaring crowd of supporters in Columbia at the University of South Carolina's Carolina Volleyball Center.

With nearly every precinct reporting, Clinton was leading Sen. Bernie Sanders (I-Vt.) late Saturday 74 percent to 26 percent. The 48-point margin was more than twice what many observers had predicted. Clinton was on track to take 39 delegates to Sanders’ 14.

Even more jarring to the Sanders campaign than the size of his loss was his drubbing among African Americans, who made up 62 percent of the electorate. According to exit polls, black voters split 87 percent to 13 percent in Clinton’s favor.

Clinton’s strong showing came just three days before the biggest prize yet of the primary season: Super Tuesday, when 11 states weigh in on the Democratic presidential nomination. Sanders is hoping to score victories in a handful of those states — Massachusetts, Minnesota, Colorado, Oklahoma and his home state of Vermont — but Clinton’s renewed momentum could make that difficult. 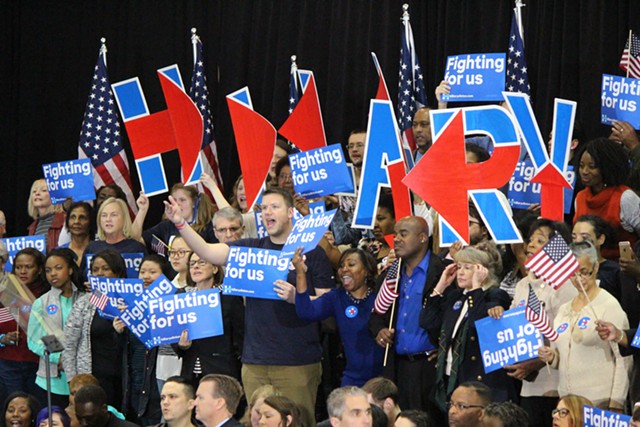 As she has since suffering setbacks early this month in Iowa and New Hampshire, Clinton continued to co-opt Sanders’ populist message Saturday night.

“It’s important that Wall Street never threaten Main Street again. No bank can be too big to fail and no executive too powerful to jail,” she said. “But America isn’t a single-issue country, my friends. We need more than a plan for the biggest banks.”

Even as she dispatched Sanders in South Carolina, Clinton appeared eager to confront the leading candidate for the Republican nomination: real estate tycoon and reality television star Donald Trump.

Striking an optimistic tone, Clinton seemed keen to contrast her message with the increasingly hostile — and, at times, juvenile — rhetoric of the Republican nominating contest.

“I know it sometimes seems a little odd for someone running for president these days in this time to say we need more love and kindness in America. But I’m telling you, from the bottom of my heart, we do. We do,” she said. “We have so much to look forward to. There’s no doubt in my mind that America’s best years can be ahead of us.”

Clinton’s supporters at the Carolina Volleyball Center didn’t have to wait long to learn the outcome of Saturday’s primary. They counted down to 7 p.m., waiting for polls to close around the state, and erupted in cheers when CNN declared Clinton the victor. “Tonight, the Democratic voters of South Carolina have rendered a significant verdict,” he said. “Tonight has started Hillary Clinton on her way to the White House.”

Cynthia Calef, a cancer researcher from Columbia who spent months volunteering for the Clinton campaign, called it “a wonderful night, full of positive energy.”

“I’m not surprised, but I am so thrilled, because I feel that she is the most qualified person,” Calef said on her way out of the victory party. “She is not somebody who will be trained on the job. She knows how to get the job done.”

Though South Carolina votes reliably Republican, Calef expressed confidence that Clinton could compete in the general election — particularly if she faced off against Trump.

“A lot of Republicans that I know — friends of mine — they would rather now turn over to the Democratic Party and vote for Hillary than to vote for Trump,” she said. 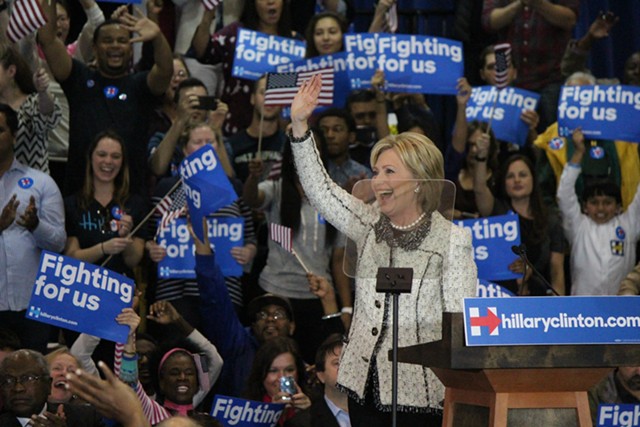 Julia Nelson, the mayor of Manning, S.C., supported then-senator Barack Obama over Clinton eight years ago. But on her way out of Saturday’s celebration, she said she was “glad [Clinton] will be his successor.”

“It’s not the time for anyone that’s practicing theory or ideology,” Nelson said, referring to Sanders. “You need someone with good practice. She has the experience. She’s strong enough to stand up to whatever confronts America.”

Clinton’s Democratic rival didn’t stick around to learn the result. Sanders left South Carolina Saturday morning for a series of rallies in Texas and Minnesota. According to reporters traveling with him, his plane took off from Dallas just moments before the polls closed in South Carolina.

After landing in Rochester, Minn., and learning the extent of his loss, Sanders delivered brief remarks to those reporters before heading to a rally.

“In politics, on a given night, sometimes you win, sometimes you lose. Tonight we lost,” Sanders said, according to NPR’s Sam Sanders. “I congratulate Secretary Clinton on her very strong victory. Tuesday, over 800 delegates are at stake, and we intend to win many, many of them.”