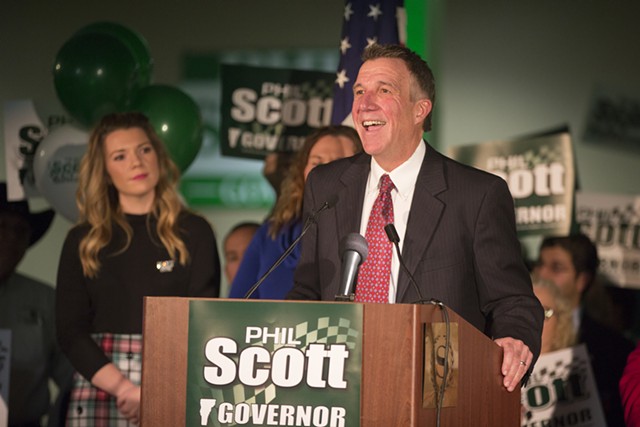 “I’m looking for somebody who can build consensus within the party,” said Scott, a Republican candidate for governor who joins a group of about 30 state legislators backing Rubio. “I think he has treated people and the process with respect… I think he has a calming effect.”

Bruce Lisman, who is competing with Scott for the Republican nomination, has declined to reveal whether he’s decided whom to support for president.

Democrats Sue Minter and Matt Dunne, competing for their party's nomination for the open governor's seat, have both said they are supporting Sen. Bernie Sanders (I-Vt.) for president in the primary.

Scott had been deliberating between Rubio and Ohio Gov. John Kasich, after dismissing business mogul Donald Trump, Sen. Ted Cruz (R-Texas) and retired neurosurgeon Ben Carson as candidates he would not support — even if they were the party’s nominee.

Scott's critics were quick to point out, though, that Rubio is also strongly anti-abortion and supports defunding Planned Parenthood.

“It is my opinion Rubio is equally, if not more, opposed to women’s reproductive rights,” Minter said. The issue matters particularly in this election, she said, as the next president is likely to make appointments to the U.S. Supreme Court that could affect the 1973 Roe v. Wade decision that makes abortion legal.

For Scott, who has supported parental notification for minors seeking abortions, the issue could prove to be one of the thorniest in the election.

The Vermont Democratic Party piled on Friday afternoon, accusing Scott of attempting to slip his decision to support Rubio by the press.

Scott didn’t join a Statehouse press conference Thursday at which some 30 legislators endorsed Rubio. As the event took place, Scott was presiding over the Senate session. Earlier Thursday in the Statehouse cafeteria line, when Seven Days asked Scott whether he’d chosen a presidential candidate yet, he readily offered that he’d decided on Rubio.

But Rubio has voted against Planned Parenthood funding as a U.S. senator, earning a 100 percent rating from National Right to Life, the largest anti-abortion organization in the country.

Scott said he doesn’t agree with Rubio on all issues, but considers him the strongest candidate to bring the Republican Party together. “We differ on this issue,” he said. “I’m pro-choice and I believe in the concept of funding Planned Parenthood.”

National Right to Life strongly backs Rubio, coming to his defense in attacks from Cruz.

“Marco Rubio voted to defund Planned Parenthood before Ted Cruz ever got to the U.S. Senate,” National Right to Life president Carol Tobias said, according to Politico. “Since Ted Cruz joined the U.S. Senate, both he and Sen. Rubio have voted the same on every roll call that National Right to Life regards as pertinent to defunding Planned Parenthood.”