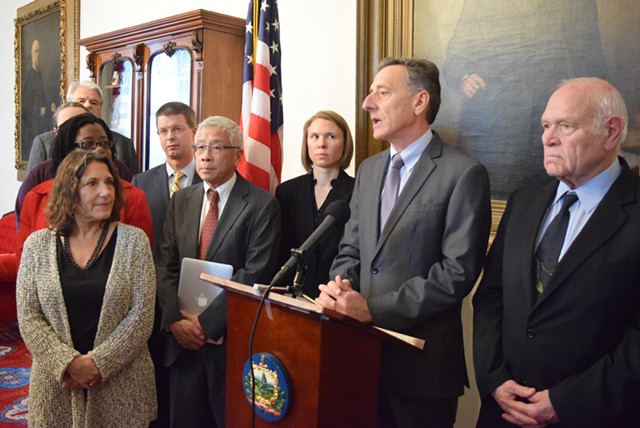 Two hours after learning that five private drinking-water wells in North Bennington had tested positive for a chemical,  Gov. Peter Shumlin called a news conference to detail how his staff was responding.

Shumlin clearly wanted to contrast his administration’s quick action with the slow response that Republican Gov. Rick Snyder of Michigan had to the lead contamination of the drinking water in Flint.

Prompted by news that contamination had been detected in water sources in nearby Hoosick Falls, N.Y., the Department of Environmental Conservation took water samples from the municipal water source in North Bennington, and from wells at three homes, a business and the wastewater treatment plant. The test looked for perfluorooctanoic acid (PFOA), a chemical used to make Teflon. North Bennington was home to a Teflon manufacturer, and the company, Saint-Gobain Performance Plastics, still operates a plant in Hoosick Falls.

No PFOA contamination turned up in the town water supply, but levels exceeding what the Vermont Department of Health considers safe were found in the other wells, Shumlin said.

State officials had advised the homeowners when they took the samples that they might want to discontinue drinking their water, said Alyssa Schuren, the environmental conservation commissioner. Now the state plans to provide them with bottled water for drinking and cooking.

Health Commissioner Harry Chen said the contaminated water posed no hazard when used for washing. “We don’t expect any acute health effects,” Chen said. The concern would be the cumulative effect of exposure to PFOA, he said.

Schuren invited anyone with worries about their water to call. Additional wells will be tested, she said.

The chemical plant in North Bennington closed in 2002.

State officials said they will investigate how the wells became contaminated. “We are going to want accountability,” Shumlin said.

Standard water tests don’t pick up the presence of PFOA. Detecting PFOA requires sophisticated technology, so the water samples from North Bennington had been sent out of state. Chen said, however, that water systems could be treated to remove the chemical.

Shumlin said the chemical wouldn’t have been picked up in the testing that would have been mandated by a 2011 bill that he vetoed. The bill was going to require testing for arsenic and several other toxic substances when property was developed or sold. Shumlin rejected the measure, saying he didn’t want to burden rural landowners whose water is generally safe.