In Robocall, White Nationalist Calls on Vermonters to Back Trump | Off Message

In Robocall, White Nationalist Calls on Vermonters to Back Trump 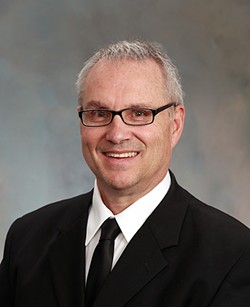 A little after 7 p.m. Wednesday, Sultana Khan picked up the phone at her Randolph home and heard something unexpected: a recorded message from the leader of a white nationalist group, urging her to vote for Republican presidential candidate Donald Trump.

"It was pretty shocking," she says.

Khan wasn't the only recipient. The man behind the ad, American Freedom Party chairman William Daniel Johnson, says his super PAC attempted to reach nearly every consumer landline in Vermont Wednesday night. He says he chose the state, after placing similar calls to Iowa and New Hampshire, because he was curious how such a liberal populace would respond.

"I thought that Vermont would be one of the least supportive states. And, you know, I was right," Johnson says. "We got more negative responses in your state than other states."

A recording of the American National Super PAC robocall that went to Vermonters Wednesday night
Update Required To play the media you will need to either update your browser to a recent version or update your Flash plugin.
In the somewhat rambling and incoherent, 45-second message, Johnson identifies himself as a "farmer and white nationalist," bemoans the lack of "beautiful white children" in schools and repeatedly says, "Don't call me racist."

"The white race is dying out in America and Europe because we are afraid to be called racist. This is our mindset," he says on the recording. "It's OK that our government destroys our children's future, but don't call me racist."

Underhill resident John Barbour, who provided Seven Days a recording of the message, says he was "astounded" to hear it.

"I would certainly hope Vermont's not fertile ground for getting a few votes from doing that," he says.

But Khan, who identifies as biracial, says she's not too surprised that Johnson would target such an overwhelmingly white state — one she believes is not as tolerant as it likes to think.

"I think minorities have had a pretty rough go of it in Vermont over the last couple months," the freelance journalist says, referring to a racially charged protest in St. Albans last December and Ku Klux Klan recruitment flyers that appeared in Burlington last November. "Vermont is not this liberal bastion of egalitarian society. There are a lot of race issues here, and the fact that a white supremacist group is targeting Vermont with this kind of ad is pretty telling."

"I don't know whether it's breaking laws or not but it's certainly not in the spirit of the way we do things in Vermont," he said.

Johnson says the American National Super PAC, of which he is treasurer, spent roughly $4,000 to place the robocalls in Vermont. He plans to call Minnesota later Thursday. Talking Points Memo and VTDigger.org first reported on the calls to Vermont.

The white nationalist provided his personal cell phone number at the end of the message, in part to comply with federal electioneering requirements, but also to gauge the response. He says he heard from roughly 250 Vermonters Wednesday night, the vast majority of whom reacted negatively to his message.

"Oh, sure, [there were] a lot of supporters, but they were a definite minority," he says.

Described by the Southern Poverty Law Center as "an uninspiring but determined white separatist," the Los Angeles lawyer says he is concerned that "the white race is dying out everywhere" because the United States and many European countries are "being overrun by all sorts of refugees and immigrants from the Middle East and Africa."

Johnson says he has been inspired by Trump's candidacy, even though he plans to vote for American Freedom Party candidate Bob Whitaker for president. Trump has previously distanced himself from white nationalists.

"Donald Trump speaks his mind, and he's not constricted by the political correctness that has gripped the nation for the last 30 years," Johnson says. "So I think, regardless of his politics, he's good in that respect."

Johnson says he briefly considered making robocalls to support Sen. Bernie Sanders' (I-Vt.) presidential campaign, too, but his wife recommended against it.

"Bernie Sanders is a populist. White nationalism embraces populist principles," he says. "There are things I agree with him about, too."

While Johnson says he concurs with Trump's assessment that Muslims should be temporarily barred from immigrating to the U.S., he doesn't totally back Trump's plan to build a wall on the Mexican border.

"I want a separate, white ethno-state. We need to protect our borders and we need to have a country," he says. "But from an environmentalist point of view, I'm opposed to a wall, because that keeps the animals from traveling back and forth, and that's not good for the environment."