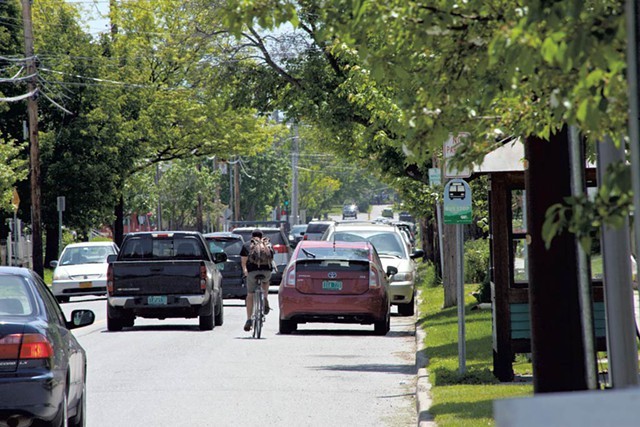 Road projects don’t typically become partisan affairs, but the debate over Burlington's North Avenue pilot project is anything but ordinary.

For months, residents have been arguing about whether the city should experiment with a new lane configuration on a busy section of the main thoroughfare that links the New North End to the rest of Burlington.

The city council unanimously approved the plan to turn a four-lane section into three lanes with two bike lanes. But in response to a petition signed by more than 1,500 residents, it also agreed to put a question on the Town Meeting ballot, asking residents whether the road should remain four lanes. A "no" vote will be interpreted as supportive of the pilot project.

In the lead-up to next Tuesday's vote, the local political parties are taking sides. Both the Burlington Progressive and Democratic Parties are promoting the pilot project.

The Burlington Republican chair, Tony Bell, said his party hasn’t officially taken a position, but, he noted, “I think our position has been that we don’t trust city hall." A January 12 post on the party’s Facebook page asked people to help collect signatures for the anti-pilot petition. Bell helped lead that effort.

During the last few days, the Burlington Democratic Party has sent out a barrage of tweets urging people to support the project by voting "no" on the ballot question. Spokesperson Steve McIntyre said he wasn’t sure whether the party would funnel any financial resources into the effort.

Why is the party wading into a road debate at all? “I’m not sure how it aligns with the platform,” McIntyre responded, before adding, “We’re definitely in favor of safer streets.”

The Burlington Progressive Party is also officially pro-pilot, according to its chair, Charles Winkleman. He explained that this position is consistent with the Progs' environmental platform, which favors “infrastructure that relies less on cars and fossil fuels.” And, Winkleman continued, “I think it also aligns with our position of making Burlington a walkable, bikeable, liveable city."

Residents have also created a pro-pilot political action committee called Better Streets for Burlington, which has printed signs and mailed a flier to registered voters throughout the city. It’s raised roughly $5,000, according to treasurer John Ewing, who said the PAC will also pay for print ads during the next few days.

The PAC has support from Local Motion — a local nonprofit organization that supports biking and walking — and all but one of the city councilors, Republican Kurt Wright, according to Ewing, who stressed that the organization had no political affiliation. Local Motion's advocacy director, Jason Van Driesche, has loaned the group $3,500.

On Thursday, New North End resident Scot Shumski filed a complaint against Better Streets for Burlington with Attorney General Bill Sorrell, alleging that it neglected to file a mass media report for the citywide mailing. The group's February 20 filing discloses that it spent $3,232 on postage for a direct mailer, but Shumski contends that it should have filed a separate mass media form and that it failed to disclose printing costs.

Ward 7 city councilor Tom Ayres, who is working with the PAC, claims Shumski's complaint has no merit. According to Ayres, the printing costs hadn't been invoiced by the filing deadline, and PACs aren't required to file mass media reports unless they are advocating on behalf of a candidate.  The attorney general's office confirmed that it received a complaint Thursday,  but has not yet reviewed it.

In an email, Karen Rowell, who began the petition effort, said her group has no "federal or state organizations funding our efforts," but she didn't respond to  questions about much money has been raised.