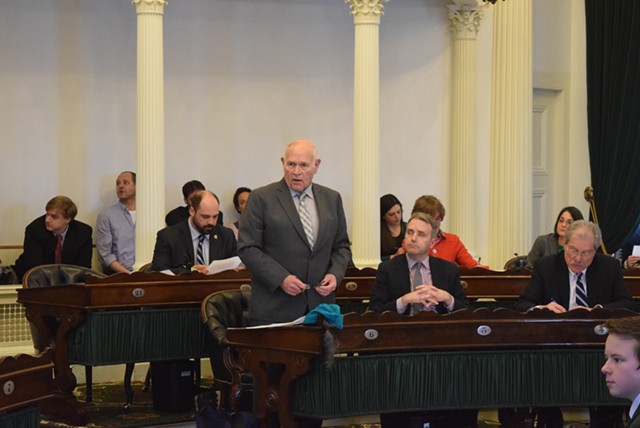 The Vermont Senate voted 16-13 Wednesday for a bill that would legalize the sale and possession of marijuana in 2018.

“For me the question has always been, ‘Does the current system of prohibition work?’” Senate Judiciary Committee chair Dick Sears (D-Bennington) said on the Senate floor. “The answer is clear.”

Sears and other supporters argued that taxing and regulating marijuana would be preferable to the current reality, with an estimated 80,000 Vermonters buying, growing and using marijuana illegally.

Opponents argued that legalization sends the wrong message. “Why are we saying, ‘Let’s legalize another drug’ when we have people who are in the grips of addiction?” asked Senate President Pro Tempore John Campbell (D-Windsor). Sen. Kevin Mullin (R-Rutland) sought to derail the bill by arguing that the Vermont Constitution requires all tax bills to originate in the House rather than the Senate. Lt. Gov. Phil Scott, though he opposes the marijuana bill, ruled against Mullin, saying the bill wasn’t, at its core, a tax bill.

Sears argued the bill carries an abundance of measures designed to avoid problems seen in other states that have legalized marijuana. No edible products or home-growing would be allowed, for example, after other states reported difficulty regulating both.

Vermonters over age 21 would be able to buy up to half an ounce of marijuana and out-of-staters a quarter-ounce per transaction. Possession of up to an ounce would be legal for those over 21.

“It’s a cautious bill,” Gov. Peter Shumlin said, heralding the Senate vote moments after it was taken. Shumlin, who called for legalization in his State of the State address in January, expressed optimism that he can persuade the House to follow suit. “Logic will lead it to the governor’s desk,” he said.

That won’t be easy. House Speaker Shap Smith (D-Morristown) said this week of the bill, “I think it has some significant challenges.”

House Judiciary Committee chair Maxine Grad (D-Moretown) previously said she has concerns about both highway safety and its impact on youth.

Shumlin, who served in the Senate before becoming governor six years ago, doesn’t have close relationships with the House members he’ll need to persuade. But the governor, who is not seeking reelection, argued that now is the time.

“Who knows what the next governor will do? We could be sitting here six to eight years from now having this debate,” he said. “There aren’t too many governors in America who are taking the position I’m taking.”

Sears said when Shumlin asked him to consider marijuana legislation some nine months ago, he agreed, but was personally skeptical. “I told him I would not vote for the bill.”

After five public hearings around the state, Sears said he was persuaded that regulating marijuana as the state does alcohol would be better than having Vermonters buy it from drug dealers. “The biggest thing I heard was from the kids who were telling us how easy it is to get today,” he said.

A cadre of marijuana home-growers opposed the bill, arguing that it will put marijuana into the hands of a few well-funded businesses. Stuart Savel of Brattleboro, who said he is a registered medical marijuana user who grows his own, sat in on the Senate debate.

Sen. Becca Balint (D-Windham) said she voted against the bill because it doesn’t allow home-growing.

Others agreed that’s a problem but supported the bill anyway. “I’m unhappy with the idea of commercializing marijuana,” said Sen. Dick McCormack (D-Windsor). “I will vote for the bill on the understanding that it is a step forward.”

In hopes of appeasing home-growers’ concerns, Sears agreed to move up the date, to October 2017, for a commission to make a recommendation on whether Vermont should allow home-growing.

Supporters had feared they might eke out just a 15-14 vote, but the bill picked up support from Sen. Ann Cummings (D-Washington).

The bill faces another vote Thursday in the Senate, with possible amendments, then goes to the House. If it passes, Vermont would be the first state to legalize marijuana through legislation. Colorado, Washington, Oregon and Alaska have legalized it through public votes.

The bill calls for state permits that would allow up to 30 marijuana growing facilities and 30 stores to sell marijuana starting January 2, 2018. There would be a 25 percent sales tax, with revenues directed to drug treatment and prevention, law enforcement, and administration of the permitting system.