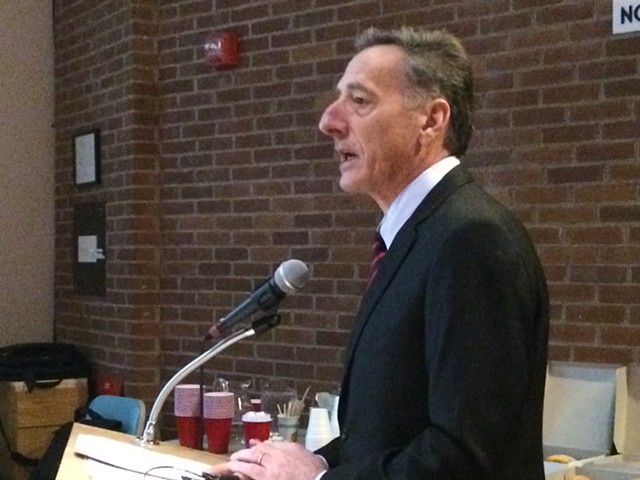 Gov. Peter Shumlin won a promise from the state treasurer and the Vermont Pension Investment Committee that they would consider his call for divesting from coal and ExxonMobil stocks.

The governor proposed divestment in his State of the State speech in January. Treasurer Beth Pearce has pushed back, saying that decisions about pension investments should be based on financial criteria, not political considerations.

But after Shumlin made his pitch to the pension investment committee Tuesday morning, citing financial — as well as moral — reasons to divest from coal and ExxonMobil, Pearce said, “I am committed to a full vetting of the issues.”

Representatives of organizations lobbying for divestment welcomed the thawing in the stance that Pearce and the panel had taken. “I see it as progress, although not as fast as any of us who support this want to see,” said Paul Burns, executive director of the Vermont Public Interest Research Group.

Shumlin opened his speech to the pension committee with a conciliatory message about his differences with Pearce: “She and I share our concern for our planet."

Shumlin focused first on ExxonMobil, which he noted had spent millions of dollars on advertising to sow doubt about climate change, while at the same time its own research showed that climate change was real. If the committee wasn’t persuaded to act by this moral case, he urged them to look at the stock’s underperformance in recent years.

Similarly, he noted that financial institutions are scaling back their investments in coal projects, and coal is shrinking as a means of electric generation. He cited coal company bankruptcies and the industry's tarnished safety record. Shumlin said, “I want all our friends in the Vermont labor community to remember that if we say no to divesting from coal, we are saying yes to the idea of investing your hard-earned dollars in mining companies that have not shown a high regard for the lives and welfare of their workers.”

Shumlin reminded the committee that the state has divested from problematic investments in the past. In the 1980s, Peter Welch, then a state senator, pushed through a bill that Gov. Madeleine Kunin signed, requiring divestment from companies doing business in South Africa. In the 1990s, then-treasurer Jim Douglas got rid of $21 million in tobacco stocks. And in 2007, then-treasurer Jeb Spaulding divested from businesses operating in Sudan.

“Divestment in Vermont has been a seldom-used, but necessary tool to confront major challenges and put us on the right side of history,” the governor said.

Shumlin wants the pension committee both to divest and set up a “screen” that identifies bundled blocks of stock that include coal companies, so the state can avoid those in the future.

Tom Golonka, chair of the Pension Investment Committee, suggested that such filters could be expensive to create. He said the cost could go as high as $3 million. Pearce echoed this concern.

Shumlin interrupted. “It is always easy to find obstacles to pressing change,” he said. He suggested the Vermont panel considering moving its money, if it can’t persuade its money managers on Wall Street to give Vermont a good deal to create screens for coal companies.

The governor said he would prefer that the investment committee take the necessary steps to divest, but warned, “It has to be resolved by the end of the legislative session. If you don’t, I will push the legislature to do it because I think it must be done.”

The Senate Government Operations Committee is likely to vote on a divestment bill after the legislature’s one-week Town Meeting break.

“We will be in touch,” Golonka responded.

Correction February 23, 2016: An earlier version of this story misidentified the chair of the Vermont Pension Investment Committee. His name is Tom Golonka.