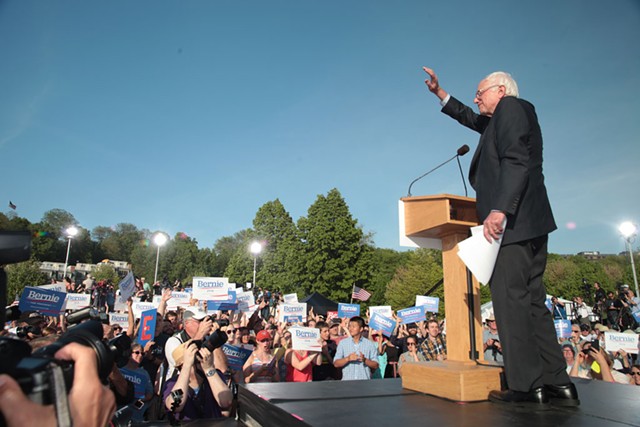 A Vermont Public Radio poll released Monday showed Sen. Bernie Sanders (I-Vt.) with a huge lead in his home state over rival Hillary Clinton. Sanders had the backing of 78 percent of those likely to vote in the Democratic presidential primary on March 1, compared with 13 percent for Clinton.

Those who would vote as Republicans, meanwhile, favored businessman Donald Trump, who had the support of 33 percent of likely primary voters. Sen. Marco Rubio (R-Fla.) and Ohio Gov. John Kasich trailed with 14 percent each.

The same poll indicated that Republican Lt. Gov. Phil Scott had a commanding lead over other declared candidates for governor, but that Vermonters aren’t paying much attention to that race yet.

The poll, conducted by the Castleton Polling Institute from February 3-17, posed to 895 Vermonters a host of questions about political races and public policy, and had a margin of error of plus or minus 3.3 percent. Full results are available at www.vpr.net.

The poll suggests voters looked more favorably on Sen. Patrick Leahy (D-Vt.) and Congressman Peter Welch (D-Vt.), both of whom are up for reelection. Sixty-five percent of respondents approved of the job Leahy is doing, while 59 percent approved of Welch's performance.

Many were undecided on who should succeed Shumlin in the governor’s office. Only 29 percent of voters said they know who they want to see win that contest.

When voters with a preferred candidate were asked who they would like to see win in November, Scott led with 66 percent.

The poll also explored Vermonters' positions on issues such as school district consolidation, gun restrictions, and solar and wind projects.

Fifty-five percent of respondents supported legalizing marijuana, and 32 percent opposed it. A bill that would legalize pot is under Senate consideration this week.