In Colchester, Kasich Courts Those Looking for Compromise Candidate | Off Message

In Colchester, Kasich Courts Those Looking for Compromise Candidate 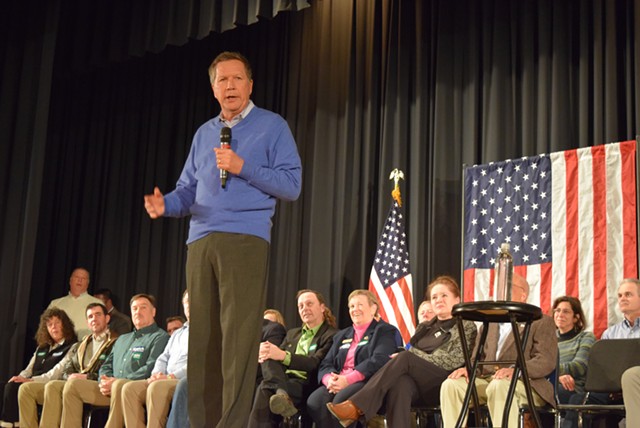 Gregory Seward of Glover says he loves Bernie Sanders, but Saturday morning he traveled to Colchester to check out someone he thinks stands a better chance of getting elected president.

Seward, a military veteran, was among 500 people who, with slightly more than a week to go before Vermont's presidential primary, filled the Colchester High School auditorium to hear from Republican presidential candidate John Kasich.

“I’m impressed,” Seward said afterward of the Ohio governor, though he added, “He’s still a little conservative for me."

Seward stood in the crowd to ask Kasich a question about veterans’ health care, but first he thanked Kasich “for taking the high road.”

That seemed to be the source of Kasich's appeal for many in the larger-than-expected crowd. In contrast to businessman Donald Trump’s January appearance in Burlington, there were no protesters at Kasich’s Saturday town hall-style meeting. The candidate didn't see a need to call on security to throw anybody out into the cold without a coat, as Trump did a month earlier.

“He’s the adult in the room,” Republican Lt. Gov. Phil Scott said of Kasich in introducing the candidate. 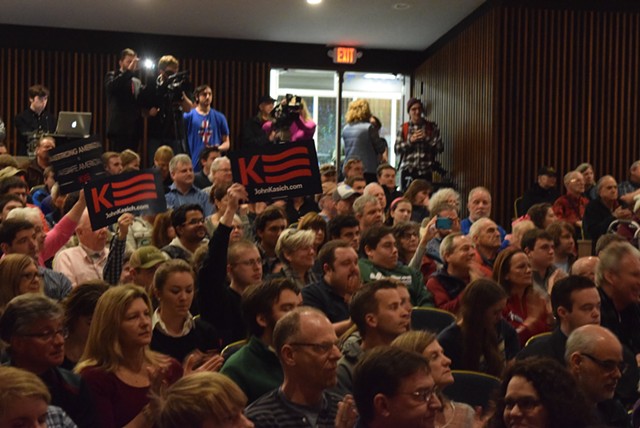 Scott, himself a candidate for governor, has not endorsed Kasich, however. Scott said before the event that he hasn’t decided which candidate he will vote for in the March 1 Republican presidential primary, but Kasich is a possibility. Scott has dismissed Trump, Texas Sen. Ted Cruz and retired neurosurgeon Ben Carson as candidates, saying he would not support any of them as the party’s nominee.

Kasich, dressed in a blue V-neck sweater and gray slacks, which gave him the appearance of a 1950s TV dad, sought to cast himself as that palatable alternative Saturday. “I’m going to run a positive campaign, whether I win or not,” he said to applause.

Kasich also appeared to be looking for a state he can place in the win column as he struggles to stay alive in the race. As Kasich spoke in Vermont, South Carolina Republicans were voting in their state's primary, and according to a CNN poll, Kasich was tied for a distant fifth place there.

Speaking from the auditorium stage and later walking through the aisles to answer questions, Kasich looked like a practiced performer. He related the same story that he had told at a CNN televised town hall earlier in the week — of his precocious visit as a college freshman to meet President Richard Nixon in the Oval Office.

Kasich also won hearty applause when he called for campaign finance reform, hitting a stretch of his speech in which he sounded a little like Sanders, the independent Vermont senator who is in a tight battle for the Democratic presidential nomination. “I hope the whole campaign finance laws get thrown out, and billionaires are not the ones to pick the president,” Kasich said.

Kasich called for lower Social Security payouts for the wealthy, doubling of funding for medical research and more renewable energy development. He did not mention that in his own state he signed a bill in 2014 to freeze renewable energy requirements. He said it’s a “sin” to put mentally ill people in prisons and declared that teachers are “the most underpaid people in America.”

But Kasich only went partway out on the Sanders' sound-alike limb.

“It isn’t about 'free' of everything,” Kasich said, making a sarcastic quip about Sanders’ supporters Ben Cohen and Jerry Greenfield, cofounders of the ice-cream company. “I want free Ben & Jerry’s for every single American in this country. Put your money where your mouth is, OK? You laugh, but [if] they believe in socialism, [then] give this stuff away.”

Kasich's attempts to cast himself as a moderate Republican drew the attention of the Vermont Democratic Party this week. His actions aren't as moderate as his words, the party contended.

"Kasich has been called the most anti-choice governor Ohio has ever seen. He signed legislation banning abortions after 20 weeks, has repeatedly cut funding for clinics, and even banned rape-crisis counselors from referring victims to abortion services," Vermont Democratic Party spokeswoman Christina Amestoy said in a statement. "He’ll be back at it again the next few days when he signs 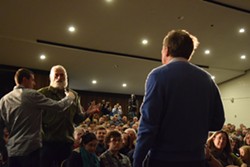 Those asking Kasich questions from the audience Saturday appeared to be looking for a candidate somewhere between the extremes they’ve seen playing out in the presidential campaign. One questioner asked Kasich for his thoughts on the science of climate change.

"I know that human beings affect the climate," Kasich said.

Leah Rosenthal of Williston asked Kasich how he would keep people from abusing Medicaid while ensuring the health care assistance remains available to those who need it. Kasich said those who receive benefits should be getting training for jobs that are available.

Afterward, Rosenthal said Kasich was winning her over: “I really like the fact that he’s so bloody reasonable.”

Rosenthal described herself as “staunchly independent." She said she voted for President Barack Obama, has watched all of the presidential debates and is trying to decide between Kasich and Sanders. Vermonters do not register by party and may vote on either party's ballot in the March 1 primary.

“I’ve been strongly supportive of Bernie. I may be changing camps,” Rosenthal said.

Rosenthal said she worries about Kasich’s efforts to defund Planned Parenthood, but also about Sanders’ ability to work with all political sides, the rich and poor, along with foreign countries. Of Kasich, she said, “He seems to be the most solidly cognizant of what needs to be done.”