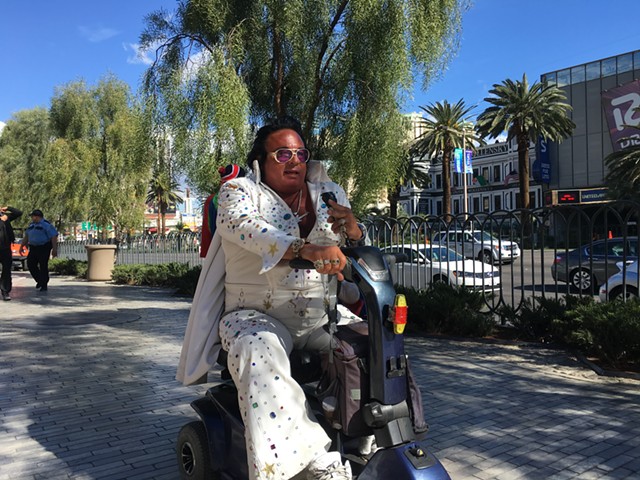 "How many thousands and hundreds of thousands has he employed to make each contract, each building, all that steel, all that concrete, all his employees later on that occupied those buildings?" Presley asked. "Amongst all the candidates running, I think he's the best to take care of the 320 million people that are in America, because he knows how to do that."

Presley revealed his presidential preferences during a wide-ranging interview Thursday morning in front of Captain Diablo's on the Las Vegas Strip. Riding a motorized scooter and sipping a Pabst Blue Ribbon tall boy, the king of rock and roll disclosed that he would also consider supporting himself in Nevada's upcoming presidential caucuses.

"Myself, I would choose me to run as president," said Presley, who also goes by the name of Michael Romero. "I think we should go to the moon. The biggest thing I would do if I was president would [be to] put a hotel on the moon. You could have dune buggies on the moon."

The Las Vegas resident — dressed in a white, sequined jumpsuit, white sneakers and purple-tinted shades — elaborated on the business opportunities he sees in a lunar hotel. 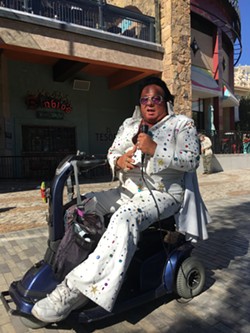 Presley/Romero dismissed several of Trump's presidential rivals, including Florida Sen. Marco Rubio ("a little too weak-looking, a little too schoolboy-looking"), Texas Sen. Ted Cruz ("Doesn't he remind you of Mr. Haney from 'Green Acres'?") and Vermont Sen. Bernie Sanders ("He's a little too old in his philosophy").

"He has a great heart and a great mind, but I'm not sure if he's capable of representing America," he said of the independent senator from Vermont. "He's not good-looking enough to be an American president, but he would look good on a quarter or a nickel."

Presley/Romero let out a cackle. Behind him, two men donned oversized Mario and Luigi costumes. A brisk wind kicked an empty can of Rockstar Energy Drink down the sidewalk.

"Bernie Sanders would look good on a nickel, but not for an American president — of today," he said, pausing to reflect on what he'd just said. "Of today."

A block north on Las Vegas Boulevard, at the Planet Hollywood Resort & Casino, wedding chapel coordinator Erin Gilday considered the candidates running for president in 2016. She said she was not sure whether she would take part in the Democratic caucuses, which are scheduled for Saturday, or the Republican caucuses, which are planned for next Tuesday.

"On both sides, I'm not enthused about any of the options this year," she said, sitting at a desk outside the dimly lit, 65-seat chapel she manages. (Presley married Priscilla Beaulieu at an earlier incarnation of the chapel in 1967, according to Gilday.) "Bernie Sanders or Donald Trump could do a lot of damage in four years." 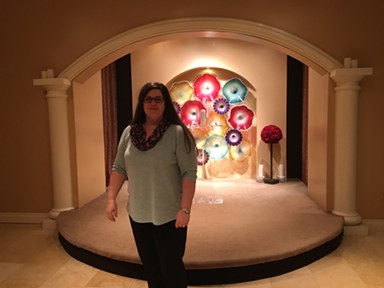 Gilday, who lives in Las Vegas and has worked at the chapel for seven years, clarified that she thinks Sanders is "one of the more honest, trustworthy candidates." But she doesn't believe his policy proposals are "feasible in the real world" — and she especially disagrees with his plan to create a single-payer health care system.

"My husband is a veteran and gets his health care through the [U.S. Department of Veterans Affairs], so I've seen what government-run health care looks like, and I think if people really knew what it was like, they wouldn't be very excited about it — because it's not pretty," she said. "Another one of those things that sounds really great on paper."

Gilday said she doesn't much care for the Republican frontrunner, either, because he "cares more about Trump than the country." She said she had seen the mogul several times when he co-owned the Miss Universe pageant and held the contest at Planet Hollywood.

"He's not nearly as orange in person as he is on TV," she noted.

As Gilday spoke, Lady Gaga's "Born This Way" played over the casino's loudspeakers.

At Trump Hotel Las Vegas, about a mile and a half away, guests seemed of two minds about the building's namesake.

"He's a jerk," said a San Diego woman who would identify herself only as Sarah. "But what does appeal to me is he's a businessman. I think that's what this country needs."

Holly Burgess, a retiree from Lafayette, Calif., sat in the ornate lobby of the 64-story tower, the perimeter of which is gilded in 24-carat gold.

"I don't want a politician," she said. "I want someone who is outside that political hoopla."

"I think he tells the truth. He's not part of the political spin," she said of the Vermonter. "But I don't like socialism."

Burgess, dressed in a black coat and pink pants, said she was impressed by Trump Hotel ("It's very nice") and would probably vote for Candidate Trump if the election were held today.

"It's because he says things so many people feel but don't say," she explained. "I think we should close our borders. Yes, let's vet foreign people coming into the country."

One foreigner staying at the Trump, a Vancouver resident who would not reveal her name, said she and her husband had patronized the hotel for years.

"We come because it's not a casino," she said. "We like the atmosphere. We like the quiet."

But the Vancouver-ite said she had considered staying elsewhere this visit because she has "serious concerns" about Trump's xenophobic rhetoric.

"It troubles me to hear the sorts of things Donald Trump has said about, you know, borders and protection and walls and so on," she said. "You can quote me on this: You Americans don't know your neighbors well enough. And from a political realm, I think it's very important to know your neighbors — especially if you're thinking about building more walls."