A Potential Buyer Sniffs Around the New England Culinary Institute 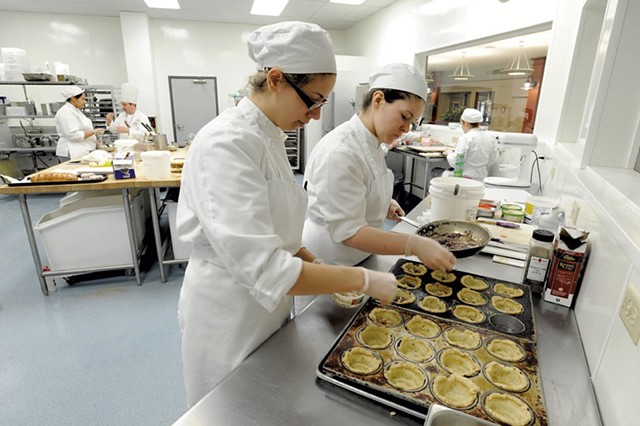 Just days after the New England Culinary Institute announced that it's for sale, the broker has reported a nibble of interest.

“I’ve had a discussion with a prospective buyer,” said Michael Rushman, a consultant in Cabot who is working with NECI leaders to sell the Montpelier-based for-profit culinary school. Rushman declined to be specific, however. “I’m really not at liberty to disclose the identity of the buyer at this stage in the discussions,” Rushman said Friday.

The school is in a strong position, he added. NECI is a well-known brand name in the culinary world, with a proven track record of educating top chefs. “It’s that tradition and the standard of education that should be attractive to a buyer,” Rushman said.

As Seven Days reported in a March 2014 cover story, NECI has faced enrollment declines and high leadership turnover in recent years. At the time, then-acting president Richard Flies told Seven Days that the number of students, which was nearly 800 in 1999, had declined to fewer than 300. To be "comfortable," Flies said, NECI needs between 350 and 370.

"It's no secret that NECI is trying to make a transition," Flies said at the time, outlining a three-year plan to buy out the school's founding owners — Fran Voigt and poets Ellen Bryant Voigt and Louise Glück — and to switch from a for-profit structure to a nonprofit one.

NECI had churned through two presidents in the four years before Flies stepped up. Last summer, Richard Scaldini came on as interim president and CEO to "prepare for the transition," the school's press release noted. Scaldini has since "completed his service." According to his LinkedIn page, Flies remains executive vice president.

NECI spokesman Philip Stevens said Friday he couldn’t comment on precise enrollment figures this semester. There are typically about 150 students on campus and another 150 off campus doing internships, he said. He also declined to say whether there had been any changes on the board of directors.

The Accrediting Commission of Career Schools and Colleges reports that it renewed NECI's accreditation last year for the next four years with a "stipulation" — meaning the school had to provide additional documentation. Stevens said he could not comment on the reasons for the stipulation. The conditions were met, according to Christopher Lambert, associate executive director of the ACCSC, based in Arlington, Va.

“This was a school that was successful,” Lambert told Seven Days on Friday. “They had something they needed to provide the commission as a follow-up. They did that and they moved forward.” The details of the stipulation are private, he said.

Without accreditation the school’s students could not tap federal loans to help pay for tuition that in 2015 ranged from $73,520 for a two-year associate's degree to $113,710 for a 39-month bachelor's degree program in culinary arts.