The Department of Corrections doesn’t want to close the 112-bed work camp in St. Johnsbury, but the state can’t afford to continue to operate it half full, Commissioner Lisa Menard told the Senate Judiciary Committee Thursday.

“We have no objection to finding a way to fill the beds,” she said. But she added that filling beds would likely require a change in law governing the type of offenders allowed at the facility. The camp has operated in St. Johnsbury since 1993.

The budget that Gov. Peter Shumlin presented to the legislature in January calls for closing the work camp, which would eliminate 22 jobs and save $1 million. Closure of the camp reduces state spending by $2.5 million, but finding prison beds for the 50 offenders now there would add to the number of prisoners confined in out-of-state facilities — which would cost the state an additional $1.5 million.

Menard said one possible inmate group that might be relocated to one of the camp’s dorms would be offenders receiving treatment for opiate addiction. Centralizing this population in one facility would reduce the department’s cost of transporting addicted inmates to regional treatment sites, she said.

With any expansion of who is eligible for the camp, Menard added, “We should look at putting a fence around it.”

“I think we are more than willing to look at changing the statute,” said Senate Judiciary Chair Dick Sears (D-Bennington). 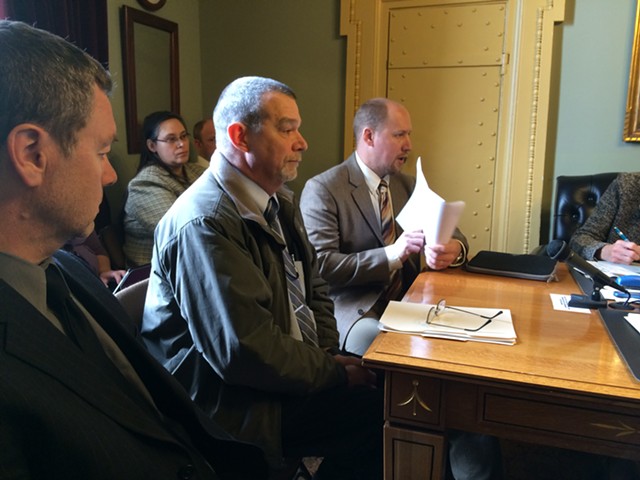 “It really helps us,” Town Manager Chad Whitehead said, passing out a long list of work the inmate crews performed. The list included building a warming shack for an ice rink, helping public works shovel sidewalks, cutting brush and trimming trees, and cutting firewood to fill the town shed. “The quality of the work is excellent,” Whitehead said.

Sears asked how willing the town might be to have a different type of inmate at the facility.

“There would be pushback depending on the type of person,” Oddy said. He predicted townspeople would oppose housing people in a drug program in one dorm. Local officials would prefer that the Department of Corrections loosen up its rules that restrict those who qualify to go to the work camp.

Menard listed the criteria that can delay an inmate's eligibility for the work camp. For example, if inmates fight in prison or get caught with drugs, they have to wait a year to be considered for the camp. If they are involved with bringing in tobacco, they must wait an extra six months. “We need people who are going to follow the rules,” she said.

“I’m concerned that you don’t want to look at other offenses that would make it [the camp] viable,” Sears told the St. Johnsbury officials.

Oddy argued that closure of the work camp had been sprung on the town. Residents would need more information about alternatives before making any decisions. He asked if corrections officials could come and make a presentation on the alternatives. Menard nodded yes.

Rep. Janssen Willhoit (R-St. Johnsbury) said he hoped to survey residents about the work camp at town meeting. Sen. Tim Ashe (D/P-Chittenden) suggested he work with someone on the committee to make sure the questions would provide information that would help the Senate make a decision about the camp’s future.

Sears said the Judiciary Committee would take up the camp question again after town meeting.