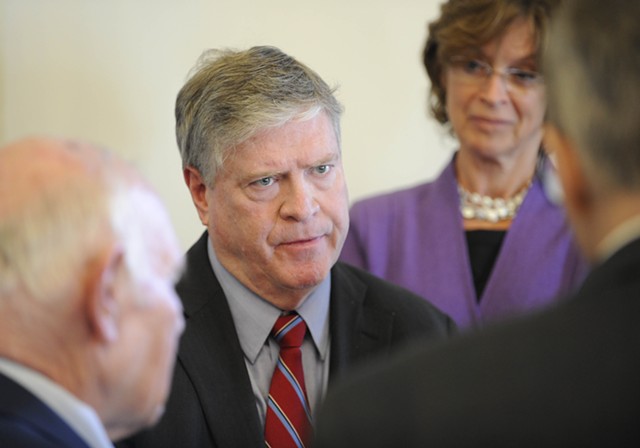 The Senate passed a paid sick leave bill Wednesday. Despite the efforts of Sen. Bill Doyle (R-Washington), the bill will not exempt small employers from having to offer paid sick leave.

Last Thursday, Doyle forced a second Senate vote on that issue. Since then, Senate President Pro Tempore John Campbell (D-Windsor) found a strategy — and the votes — to block the exemption.

While senators initially rejected a small-employer exemption, they approved an amendment that gave employers with five or fewer workers an extra year after the law went into effect — January 2017 — before the mandate would apply to them. But Doyle later asked for reconsideration, saying he had changed his mind about the rejected exemption.

Campbell bought himself some extra time to respond to this unexpected development by getting senators to agree to delay reconsideration of the exemption until this week. Wednesday afternoon, he proposed that instead of voting on the pending exemption amendment, the Senate consider his amendment calling for a study. He proposed that the Department of Labor research what sick leave benefits small businesses already offer, and effects of the mandate. The report would be due next January — a year before small employers would have to start offering paid sick leave.

Campbell acknowledged the concerns many senators had voiced about the potential impact of this new mandate on small employers. “I share that concern,” he said. His study, he suggested, would let next year’s legislature make any tweaks to the law based on evidence.

Senate Republican leader Joe Benning (R-Caledonia) suggested it was backwards to study an issue after voting to enact a law.

Senators wasted little time trying to persuade each other of the merits of substituting the study for the exemption. The sides had obviously counted their votes.

Campbell won with a 15-14 vote on his study. That killed the exemption amendment — for the second time in a week. Senators proceeded to give the bill final approval again, by a voice vote.

Catherine Davis, vice president for strategy and public affairs for the Lake Champlain Regional Chamber of Commerce, was disappointed and echoed Benning’s observation. “Typically we look to have studies before we do things, not after,” she said.

Davis said that 62 percent of chamber members with five or fewer employees already offer paid sick leave, but some are still concerned that a mandate reduces their flexibility.

The House passed a paid sick leave bill last year. It didn’t include a delay in the effective date of the mandate for small employers. House Speaker Shap Smith (D-Morristown) said he had yet to review the final Senate version, but suggested, “We are close.” The House could decide to accept the Senate version rather than enter into negotiations over any differences.