Sanders Raises $5.2 Million in 18 Hours After N.H. Victory | Off Message 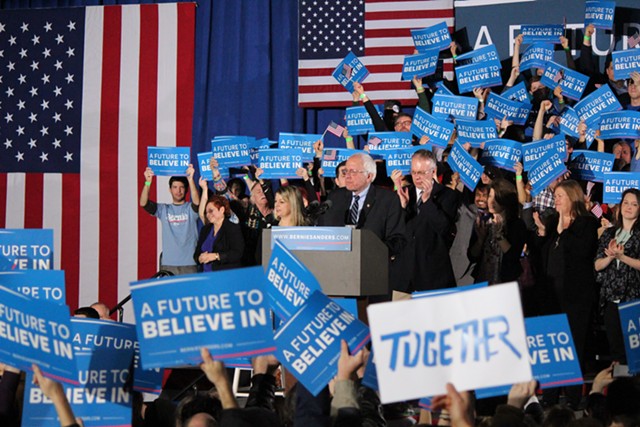 As he declared victory in New Hampshire Tuesday night, Sen. Bernie Sanders (I-Vt.) announced that he would soon depart the Granite State for the Empire State.

As the television cameras rolled, Sanders called on his loyal horde of small-dollar donors to visit his website and donate $10, $20 or even $50.

"Help up us raise the money we need to take the fight to Nevada, South Carolina, and the states on Super Tuesday," he said, referring to the coming electoral contests in his race for the Democratic presidential nomination. "So, there it is. That’s our fundraiser. Pretty quick."

Lo and behold, Sanders supporters heeded his call. Within 18 hours of the polls closing in New Hampshire, his campaign announced Wednesday afternoon, those supporters had donated $5.2 million — averaging $34 per contribution.

One such donor, as Seven Days' Terri Hallenbeck reported, was Burlington resident Michaela Quinlan. She pulled out her phone Tuesday night at Finnigan's Pub in the middle of Sanders' speech and donated $100.

According to BuzzFeed News, traffic on Sanders' website slowed to a crawl around then as it reached a peak of 51,000 concurrent visitors. The campaign's previous record was 18,000, following Sanders' narrow loss last week in Iowa.

Throughout 2015, Sanders lagged Democratic rival Hillary Clinton in fundraising. But in January, for the first time, he out-raised her, $20 million to $15 million. Clinton also collected another $5 million that month for the Democratic National Committee to use in the general election. Super PACs supporting Clinton raised nearly $45 million in 2015. Sanders does not coordinate with a super PAC.

During his trip to New York City that day, Sanders breakfasted with Rev. Al Sharpton, the MSNBC host and civil rights leader, and appeared on ABC's "The View." Later, he visited his childhood home in Brooklyn with "CBS Evening News" host Scott Pelley. He was scheduled to tape an appearance on CBS' "The Late Show" with Stephen Colbert.