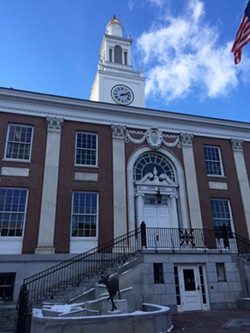 A Burlington landlord locked in a high-profile battle with the city has gone on the offensive.

Mayor Miro Weinberger's administration is pursuing criminal charges against Soon Kwon, who has accrued — and challenged — a host of code violations in his apartments. The Burlington Free Press has documented the ongoing feud for many months, reporting that Kwon's alleged violations include faulty smoke alarms and fire escapes and the presence of mold in his rental units.

On the eve of his arraignment, Kwon, who contends that code enforcement director Bill Ward has unfairly penalized him for "petty cosmetic issues," attempted to give city officials a taste of their own medicine.

His lawyer, Will Towle, emailed to Seven Days the results of an "inspection" of Burlington City Hall carried out by "agents of Soon Kwon."

The report is addressed to Weinberger and consists of 18 photos that document peeling paint, cracked drywall, chipped tiles and more. The not-quite-centenarian city hall hosts the mayor's office and several other city departments.

In an accompanying press release, Towle outlined the purpose of the stunt: “Obviously, we are trying to make a point. Code  Enforcement has forgotten its job is building safety, not trivial cosmetic issues. Code Enforcement has issued violations to Mr. Kwon for the same minor cosmetic issues readily visible in city hall.”

Reached by phone Wednesday, Weinberger was not amused. "I see this press release as an attempt to trivialize what the city believes have been very serious violations."

The mayor said the city is pursuing charges against Kwon because  "We believe he has repeatedly put his tenants at bodily risk."