Contract talks between Burlington teachers and school district leaders have hit a wall.

On Wednesday, the two sides announced they had reached an impasse. The city school board issued a press release calling on the district's roughly 400 teachers to increase their share of health insurance costs from 15 to 19 percent and accept pay increases averaging 1.8 percent.

Teachers are asking for raises averaging 7.4 percent, according to the school board.

Burlington Education Association president Bob Abbey did not dispute that number in an interview with Seven Days. He said the increase is necessary to keep an average teacher salary in the city schools at the middle of the range for teachers in Chittenden County.

He also questioned why, after Burlington taxpayers had approved large budget increases for much of the recent decade, the board's position on raises is, we don't have the money. Too much funding is going to central office positions and other costs that need to be explained, Abbey said. "Where is all the money going?" 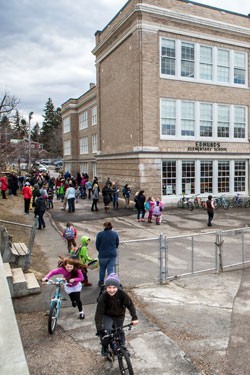 The board says much of the money is going to teachers. Median teacher pay in Burlington already averages $71,624, and that's generous, according to the board. Given that the Vermont inflation rate in 2015 increased just 0.1 percent, a large increase is not warranted, the board statement said.

"Any settlement must be affordable, sustainable and fair, not only to the teachers but to the City taxpayers," the statement said. "At this point, it is clear that the BEA is unwilling to confront the realities that most taxpayers are facing. Hopefully, this will change soon."

The next step is to bring in a mediator, possibly in the next month, to see if the two sides can agree. The current three-year contract runs until Aug. 31.

Abbey, a third-grade teacher at J.J. Flynn Elementary, said the union wants to make progress, but has concerns,  "We just kind of have to see," said Abbey. "Both sides need to be ready to have some very honest talks about the finances and where the money is.”