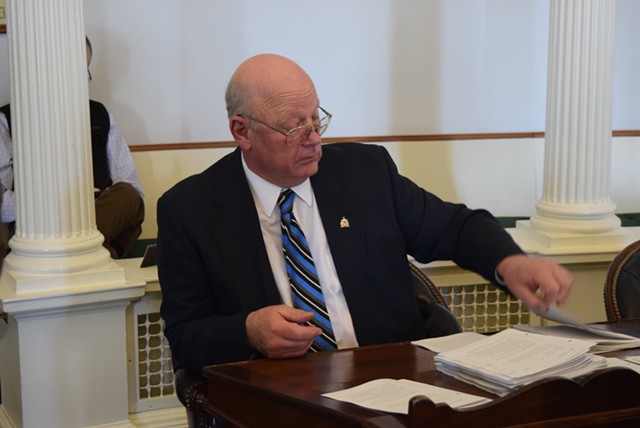 A lawyer for Sen. Norm McAllister (R-Franklin) says he plans to seek two separate trials for his client, who is charged with sexual assault.

Defense attorney Brooks McArthur would like the first one to cover allegations that McAllister forced his Statehouse assistant to have sex with him. “I find her story to be the most incredible,” said McArthur, contending the alleged victim has given different accounts of the timing of the assaults, and that legislators have said in sworn depositions that the woman never indicated anything was amiss.

McAllister is also accused of coercing a woman who worked on his Highgate farm to have sex with him in exchange for rent. A third woman who has since died was allegedly propositioned. Criminal charges involving those two women would be addressed in a second trial, if a judge agrees, McArthur said.

McAllister, 64, of Highgate Springs, was arrested last May as the legislature was completing the 2015 session. He pleaded not guilty to three felony counts of sexual assault and three misdemeanor counts of prohibited acts. When the legislature reconvened in January, his Senate colleagues suspended him while the charges remain pending.

In a phone interview about his legal strategy, McArthur said he expects the Franklin County State’s Attorney’s Office to oppose separate trials, but he argued it would be more fair for McAllister. “If a jury hears about multiple incidents, it’s more likely they’ll go along with it,” McArthur said.

Diane Wheeler, Franklin County deputy state's attorney, did not return a call about the case.

Jury selection is set for May 10, and the trial should start within days of that, according to McArthur.

The defense attorney said he will argue that McAllister never forced sex on anyone.

Whether his charges are tried together or separately, McAllister is likely to go on trial at about the time legislators are finishing the 2016 session. McArthur said the timing was coincidental, and, even if the session runs long, the trial will go on. As many as eight legislators could be called to testify about the charges related to McAllister’s Statehouse assistant.

McArthur said that when he questions McAllister’s former assistant, he will be looking to clarify when she claims the alleged assaults started. In an affidavit, police indicated she said it was after she graduated — presumably from high school, when she would have been 18. In an interview with Seven Days political editor Paul Heintz, she claimed to be 15 or 16.

“We have evidence Norm McAllister didn’t even know her, well into her 16th year,” McArthur said.

Seven Days successfully quashed the state’s attorney’s subpoena for Heintz to be deposed. McArthur said that he may try to question Heintz to show that the assistant has told different stories.