Divisions on Display at New Hampshire Democratic Dinner | Off Message "You have no idea how awesome you look," he said to both sides of the arena, filled with some 6,000 people for the party's annual McIntyre-Shaheen 100 Club Celebration.

"Minor divisions" aside, Buckley predicted to the crowd, Republicans wouldn't stand a chance in New Hampshire this November because they'd be up against "a united Democratic Party."

Maybe. But the party didn't look so united Friday night, just four days before Sanders and Clinton were scheduled to face off in New Hampshire's first-in-the-nation presidential primary. Sanders supporters, in particular, made clear their distaste for Clinton and the high-profile politicians who support her — and they weren't shy about it.

When Democratic National Committee Chair Debbie Wasserman Schultz took the stage, with U2's "Beautiful Day" blaring over the PA, a chorus of boos rang out from the Sanders side of the arena. The DNC chair has faced criticism from Sanders partisans for initially sanctioning only six Democratic debates and for doling out a tough punishment to the Sanders campaign following a data breach last December.

"You know, one of the things I really appreciate about New Hampshire is that we are respectful of other people's points of view," she said, turning toward the Sanders section of the arena. "And so I hope everybody here will be respectful of whatever choices each of us make in this primary election — because we need each other come November." 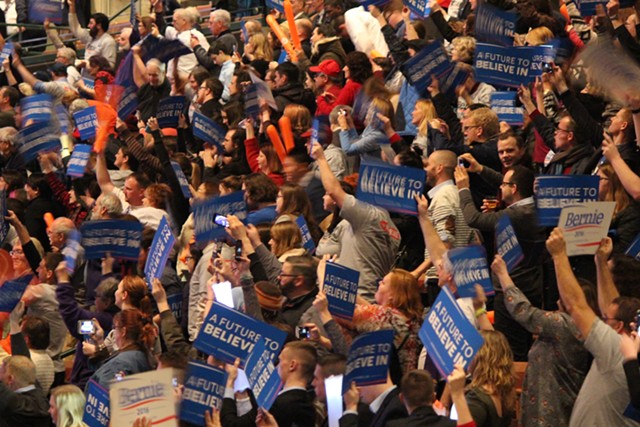 The decorum of certain Sanders supporters has become an unexpected subplot of the campaign in recent weeks. News organizations have documented the vitriolic and occasionally misogynistic tone coming from certain corners of the campaign's online universe. As BuzzFeed's Evan McMorris-Santoro noted, the campaign's rapid response director, Mike Casca, has felt the need to intervene.

“[I]f you support @berniesanders, please follow the senator’s lead and be respectful when people disagree with you,” he wrote on Twitter.

At Sanders' Iowa caucus watch party Monday night in Des Moines, his supporters booed when Clinton's speech was briefly broadcast over the enormous television screens in the hotel banquet hall.

The audience Friday in Manchester didn't go nearly that far — and Sanders himself struck a respectful tone toward Clinton's supporters when he addressed the arena.

"Let me say a word to every person in this room, regardless of who you are supporting in this nomination process. I want to congratulate all people here for doing what is a difficult thing to do," he said. "That is to spend considerable amounts of time and energy trying to make this country a better place in which to live and work. Thank you all."

"And let me also say to every person in this room that on our worst day we are a hundred times better than any of the Republican candidates on their best day," the Vermonter said.

At the conclusion of Sanders' nearly half-hour speech, roughly half of his supporters stood up and filtered out of the arena — evidently uninterested in hearing from his opponent.

When Clinton replaced him at the podium, dancing to Rachel Platten's "Fight Song," the former secretary of state acknowledged her long odds in New Hampshire.

"Over the past few days, some people have looked at the polls that show Sen. Sanders with a big lead here and suggested—" Clinton said, interrupted by cheers from those remaining in the Sanders section.

"That's a fact," she continued. "And suggested I should just look past New Hampshire and focus on the next states."

Clinton's own supporters, to her right, booed at the notion.

"Well," she yelled. "New Hampshire's never quit on me, and I'm not going to quit on you!" Clinton turned to her left to face the Sanderistas.

"I want you to know that I am truly glad that you are involved in this process and in the Democratic Party," she said. "You are bringing energy, ideas and urgency to our shared causes. And I can't help but think about how I felt when I first came to New Hampshire in 1968 to campaign for my presidential candidate, Gene McCarthy, to end the war in Vietnam."

She recounted other acts of youthful activism, from fighting racism in Alabama to registering Latino voters in South Texas.

"I learned what you all are proving every day: You can make change without being elected to anything," she said. "You just need to go and do it. So I respect not only your enthusiasm, but also your seriousness about helping to make our country what it can and should be."

Clinton said she hoped she could convince her opponent's fans to give her another look by proving that it was she, not he, who could make the change they craved.

"Sen. Sanders and I share big progressive goals for our country," she said. "But I believe I've laid out stronger plans for how to achieve them and how to make a real difference in people's lives soon."

A smattering of Sanders supporters listened attentively, but most of them were already gone.